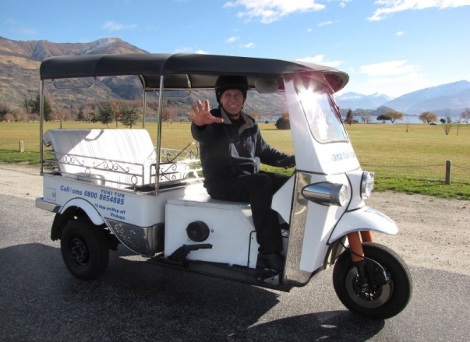 ‘‘It’s like riding a ray of sunshine,” is how Wanaka man Will Miller describes the experience of driving the resort’s new tuk-tuk.

‘‘People just smile – they look and smile and point.”

Together with his wife Rosa Stackhouse-Miller and friend Simon Anderson, Mr Miller has started an unconventional new transport service called Wana tuki-tuk, an idea months in the making.

‘‘We were sitting around last year talking about doing crazy stuff and tuk-tuks came up. On the internet we found one in Invercargill – a guy had imported one about five years ago [from Thailand].”

The tuk-tuk, powered by a 550cc two-cylinder Isuzu engine, is running a pick-up and drop-off service within a roughly 3km radius of Wanaka’s town centre.

Mr Miller said the tuk-tuk was greeted by “lots of smiling people” during the Queen’s Birthday weekend launch, which had been a big success.

“It was just a lot of fun and there were quite a few people that were enthusiastic about having the service in town.”

One response to “‘Riding a ray of sunshine’ – tuk tuk in Queenstown Lakes, New Zealand”