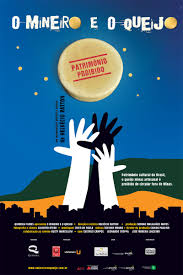 Helvécio Ratton’s film  O MINEIRO E O QUEIJO,  to be released in Brazil this coming September, shows the 300-year-old tradition of Minas artisanal cheese and the contradiction which threatens its existence:  decreed a National Cultural Heritage, Minas artisanal cheese cannot be sold outside the state of Minas Gerais, Brazil.  If it is good for the people of Minas, how can it not be good for the whole of Brazil?

A political and poetic feature-length documentary, O MINEIRO E O QUEIJO tells how the technique for producing Minas artisanal cheese arrived in the 18th century, brought to Brazil by Portuguese adventurers in search of gold. Today close to 30 thousand families live off the production of artisanal cheese throughout the state. O MINEIRO E O QUEIJO was filmed in the beautiful regions of Serro, the Canastra Mountains and Alto Paranaíba, where Minas cheese continues to be produced as it has been for centuries. Made from raw milk, as are the best cheeses in Europe, Minas artisanal cheese is a national heritage threatened to extinction by outmoded laws and by the dairy industry lobby. O MINEIRO E O QUEIJO brings to us the opinions of producers, researchers and expert technicians and agronomists on the impasse faced today by Minas Artisanal Cheese.

Minas Cheese was always present at my table, and when it was decreed a cultural heritage, I had the idea of making a film namely with a cultural approach, focusing on the history and tradition of the art of cheese making in Minas. During pre-production, we discovered restrictions to Minas cheese because it is made with Raw Milk and due to a law prohibiting it from being commercialized outside the state of Minas Gerais, which hardly anyone knows about. This ended up in a film with a political and controversial note to its underlying cultural approach.  I hope O MINEIRO E  O QUEIJO informs and fosters the debate in society about what is happening today with Minas Artisanal Cheese, our prohibited and threatened cultural heritage.

Helvécio is a Mineiro (born in Minas Gerais, Brazil) and lives in Belo Horizonte, capital of Minas. His debut as director was in the filming at the Barbacena Mental Institution of the documentary EM NOME DA RAZÃO (IN THE NAME OF REASON), 1980. He went on to direct A DANÇA DOS BONECOS  (DANCE OF THE DOLLS), 1986 and MENINO MALUQUINHO  (NUTTY BOY), 1995, films that marked Brazilian cinema for treating their young audience with sensitivity and intelligence.  On the humorous side, Ratton’s sitcom AMOR & CIA ( LOVE & Co.), 1998, brought to film the social critique and fine humour of the Portuguese writer Eça de Queiroz.  UMA ONDA NO AR (A WAVE IN THE AIR), 2002, was inspired on a true story transmitted by a pirate radio station of young black Africans in a slum in Belo Horizonte.  BATISMO DE SANGUE (BLOOD BAPTISM), 2007, based on the book by Frei Betto, takes place during Brazil’s military dictatorship.  PEQUENAS HISTÓRIAS (SMALL STORIES), 2008, uses magic and humor to attract both adults and children, and marks a return of the filmmaker to the children’s universe.  The feature-length documentary  O MINEIRO E O QUEIJO (MINAS PEOPLE AND THEIR CHEESE), 2011, shows the Minas artisanal cheese tradition and the contradiction that threatens it: decreed a Brazilian cultural heritage, it is prevented from circulating in Brazil.

O MINEIRO E O QUEIJO arises from the relation between Quimera Films and its cultural territory, Minas Gerais, Brazil. We are a production company with our feet in Minas and head in the world. O MINEIRO E O QUEIJO is a low cost production with high quality image and sound, coordinated by Simone Magalhães Matos who brought together a first-rate team of professionals. Filming took place in the cheese producing sites of Serro, Canastra Mountains and Alto Paranaíba, regions that keep up the art of producing real Minas cheese.