By Emma Fitzpatrick on 8 October 2013, Via RenewEconomy.com.au 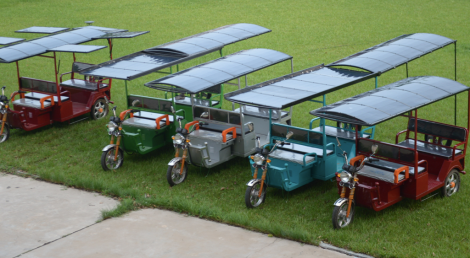 An Australian solar producer is changing the way tuk tuk’s are powered. Australian owned, Star 8 Solar, has developed a new tuk tuk, SolarTuk, which runs by using solar power from its rooftop.

Tuk tuks or auto rickshaws are an essential form of urban transport in many emerging and developing countries but also make an appearance in Europe, USA and Australia for tourism purposes. Recently developing countries’ governments (such as China) have started to ban or restrict petrol-powered rickshaws due to emissions and air quality issues.

Star 8 says it has has had significant interests from countries such as China, India, Vietnam, The Philippines, Bangladesh, South Africa and Nigeria as well as many interested parties from the Australian tourism industry.

The creator of the product, Star 8 Managing Director Jacob Maimon, came up with the concept after a holiday in Vietnam, where he noticed that tuk tuk drivers only put small amounts of petrol in the tank at a time.

“I asked him why he didn’t fill it up and he said the cost of fuel was prohibitive and he could barely cover his daily expenses with the amount of work he picked up.

“It was then that I envisaged a solar-driven Tuk Tuk with an electric engine (as back-up), which cost next to nothing to run.”

Maimon designed the SolarTuk himself and then consulted engineers to get the product made.

Star 8 is now building a factory in Cambodia where the finalised product will come in four different designs and three different engine capacities; 650cc, 800cc and 1000cc.

The SolarTuk is to be made in ten colours, containing two batteries and will hopefully cost between $2,000 and $3,000.

Two batteries allow for one to charge while the other is in use. The batteries not only power the tuk tuk but can also be used as a generator, bringing clean, renewable energy to families that have previously not had access to adequate heating, lighting and cooking.

Maimon highlights the tuk tuks green credentials in more ways than one, “Just think about it – people will be able to prepare full meals and keep warm by virtue of their solar-charged Tuk Tuks.

The SolarTuk can also gather quite a bit of speed, clocking in at 50km per hour and can drive for up to 120 km until it needs a recharge from the sun or a conventional power point.

Maimon is showing the product at the All Energy Conference being held at the Melbourne Convention and Exhibition Centre on October 9 and 10.

One response to “Australian company launches the solar-powered tuk tuk”