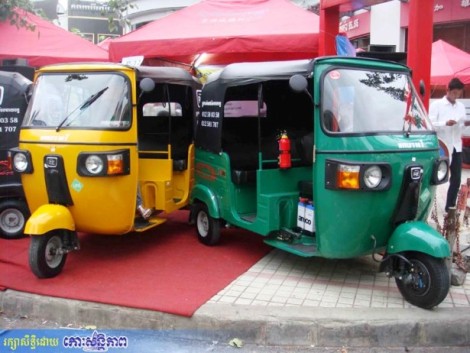 Now India’s version of the three wheeled moto, the best-selling Bajaj “three wheelers” have arrived on Cambodian shores to fight for market share in the transportation industry.

On the 17th of August, with the Sovanna Shopping Centre as a backdrop, Viper Auto Co Ltd Cambodia, the exclusive importer from India of the “three wheelers,” introduced their Indian three wheeled motos to the general public in a ceremony marking their availability for the first time in Cambodia.

During the ceremony, a marketer for the company proclaimed the merits of the “three wheelers”, made by Bajaj ( http://www.bajajauto.com/commercial_vehicle.asp), as top sellers in India, where they were popularly driven as family transport vehicles. Sales specs show that 4 million units of the high quality vehicles are sold on average per year, as they are durable, trouble free and easily maneuverable, even when road conditions are at their worst.

Among their abundant advantages, they can be driven either commercially to transport paying customers, or they can function as a passenger vehicle for the family. Like cars, they are constructed with a windscreen in front that serves as a barrier offering protection for the driver.

An odometer is standard. Front and rear wheel brakes insure stability in braking, as opposed to a tuk tuk’s solitary brake for the front wheel. When the necessity of a sudden stoppage arises, a tuk tuk would be at a distinct disadvantage if travelling at a great rate of speed, as the force of the tuk tuk from behind would be absorbed up front, creating a dangerous situation.

A special feature of the Bajaj “3 wheelers” is that they are equipped with shock absorbers and springs រេស្ស័រ that provide a less bone rattling and more comfortable ride. Durable and tough, they can be driven for more than 10 years before requiring a repair. Fitted with both a three liter capacity gasoline tank and a liquid petroleum gas (or propane?) tank ធុងហ្គាស with a 13 liter capacity, their fuel consumption is about 25 kilometers to the liter.

Should liquid petroleum gas (or propane?) ហ្គាស be used as the fuel of choice over gasoline (petrol), there is the additional benefit of a 50% savings in fuel expenses.

As a final note to potential purchasers, the announced sales price of the “three wheelers” was set at $3,000 per unit, but, as a marketing tactic to get sales rolling, Viper Auto concurrently announced that the first 15 units would be available for only $2,500.

After that, customers could expect to pay the full $3,000. A 25,000 kilometer warranty is included with each purchase, and payment by installments is an option.

Khmer news from the Koh Santepheap translated by Porky Pig