Making Gubbeen cheese at the Fergusons’ farm in West Cork. By John Carey

In the burgeoning world of artisanal cheese, Ireland is a land of legend. Starting in the 1970s, a small group of self-taught cheesemakers, centered in the western reaches of County Cork, helped usher in a fine-food revolution by turning an eccentric hobby into an influential craft. By adapting Continental cheesemaking techniques to their remote maritime setting, they managed to transform obscure Celtic names—like Gubbeen, Durrus and Milleens—into internationally recognized gourmet brands.

Now Irish farmhouse cheeses have grown up, as a second generation of cheesemakers has reached adulthood and often diversified their businesses. Along the way, several of Ireland’s best cheesemakers have opened up their farms to visitors, making it possible to tour the country with nothing but fine cheese on your itinerary.

“Ireland would be one of the fun tours,” says Rob Kaufelt, the owner of Murray’s Cheese Shop, a prime New York cheesemonger, talking about options for cheese-loving travelers. The country is a great choice, he says, “because of the people,” and because of the uniqueness of the cheese itself. “Irish grass is noteworthy,” he says, and he wouldn’t “mistake Irish cheese for anything else.” 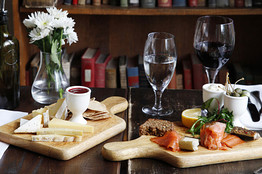 A cheese board at Dublin’s Winding Stair restaurant. By Christopher Testian

All of Ireland’s cheese-lined roads lead to County Cork, in the southwest of the country, but the place to start is in the heart of Dublin, at Sheridans Cheesemongers, the capital’s best-known cheese outlet. The small shop will surround you with the best of the season, from Kilree, a new washed-rind goat cheese, which won best-in-show at the 2011 British Cheese Awards, to classics like Gubbeen, the most approachable of Cork’s now classic washed-rind varieties.

For centuries, Irish milk was used for just about everything but fine cheese, and the shop’s co-owner Kevin Sheridan says that “a lack of tradition” helped to inspire the country’s recent wave of cheesemakers. “There were no constraints,” he says. “People imported ideas, but made them very much their own.”

Mr. Sheridan says that Ireland’s innovation in cheesemaking has also spread to the way people actually eat cheese here. No longer following the French model, which dictates that a cheese selection “is something to be enjoyed after dinner in a formal setting,” the Irish now feel free to experiment. “You’re watching a movie on a Saturday night,” he says, “and you grab a bit of Cashel Blue,” the rich, nearly rindless blue cheese from County Tipperary.

On Saturdays, Sheridans has a stand at the Temple Bar Food Market just off the Wellington Quay on the River Liffey, where you can also find a stand operated by Corleggy Cheeses, the County Cavan producer of raw-milk hard cheeses from cow, goat and sheep milk.