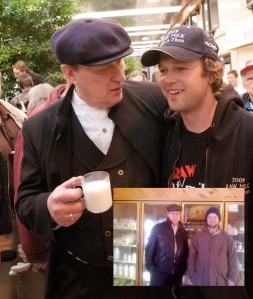 Eight people have joined Durham, Ontario area dairy farmer Michael Schmidt in the hunger strike he began Sept. 29 to protest his recent conviction on charges related to the distribution of raw, unpasteurized milk. The Bovine, a blog supporting Schmidt’s efforts, reports that a separate group in Toronto is on a rotational fast in support of Schmidt’s “Hunger Strike For Responsible Food Freedom.”

The Sept. 28 verdict, written by Justice Peter Tetley of the Ontario Court of Justice, reversed a 2010 decision made by a justice of the peace who acquitted Schmidt of the same charges. It is unclear what the decision means for the future of Schmidt’s farm, a cow-share operation in which raw milk and related products are provided to about 150 shareholders. Raw milk from the farm is not sold commercially.

A second legal battle looms for Schmidt in B.C. He has been served with contempt of court charges that threaten a $55,000 fine that stem from his involvement in Our Cows Inc., a Chilliwack, B.C. cow share that authorities attempted to shut down last year.

Operator Alice Jongerden was charged with contempt for distributing raw milk, considered a hazardous substance under provincial health laws. Schmidt stepped in and figured out how to keep milk flowing to members by relabeling products as cosmetics “not for human consumption.”

According to an Oct. 10 news release issued on Schmidt’s behalf, the eight fellow hunger strikers include Max Kane and Vernon Hershberger, both of Wisconsin, and Alberta farmer Bernie Cosgrove. Five others do not want to be named, the release said.

The release quotes Schmidt as asking the Ontario and B.C. governments to legalize the sale of raw milk and cow share operations. “This objective also includes the end of the current prosecutions of cow shares which meet proper production standards,” he states.

In an Oct. 9 entry on The Bovine Schmidt noted that he is only drinking water and lemon juice and has lost 20 pounds since he started.