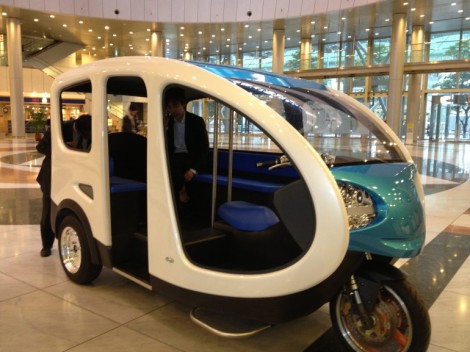 Auto rickshaws, also known as tuk-tuks, three-wheelers or by numerous other names, are a common sight on the streets of many Asian cities. An evolution of the traditional pulled or cycle rickshaw, the gasoline-powered vehicles, which are used as taxis, are a major source of pollution in many Asian cities. Japan’s Terra Motors hopes to capitalize on efforts to cut tuk-tuk pollution with its new electric three-wheeler aimed at emerging Southeast Asia markets.

Although they are generally powered by high polluting two-stroke engines, a number of governments in Southeast Asia are forcing changes in an effort to improve the air quality in major cities. Some are forcing a switch to CNG or LPG fuel, while others are banning two-stroke engines in favor of four-stroke engines. The Philippines government is embracing locally emission-free electric powered tuk-tuks, with plans to introduce some 100,000 such vehicles by 2016.

Terra Motors is aiming for a slice of this pie with its electric three-wheeler, alongside the wider goal of becoming the world’s biggest seller of electric tuk-tuks within the next two years. Likely strengthening the company’s bid, Terra Motors will produce the vehicles in the Philippines.

Since the “tuk-tuk” moniker is derived from the noise the traditional two-stroke engined vehicles make, the switch to almost silent electric power could see them requiring a new name.

Terra Motors plans to sell its EV Tricycle Taxi from later this year for around US$6,300.