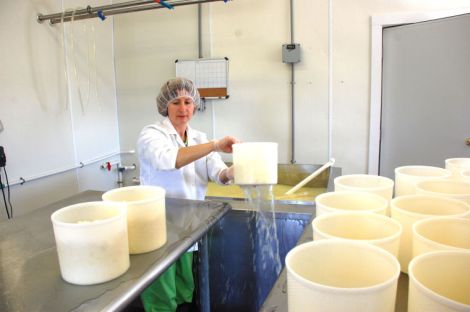 (By Tony Russo)
Cheesemaker and owner of Chapel’s Country Creamery, Holly Foster, transfers the curds for Bay Blue Cheese into molds where they will settle into rounds and be set in the aging room to finish.

The Fosters, as do most farm families, live under the constant threat of chaos. The daily expectation is projects will start to spin out of control. Whether they stay that way or not depends more on luck than they would like but also on patience, skill and fortitude.

Recently, Eric Foster was crushed by one of his cows in the milking room. After determining the injuries weren’t life-threatening, he headed to another farm, diagnosed an illness in two calves and treated them. His wife, Holly, finished the milking on her own and got the four kids organized and ready for the day. This all occurred before 9 a.m. on a day when Foster processes cheese.

“The good thing about cheese is it can wait if it has to,” she said. “So if things get zoo-y, I can push it back a day.”

“Zoo-y,” meaning like a zoo, is one of Foster’s favorite adjectives, or at least the most appropriate descriptor she has at her disposal. She uses it often and as if uttering a small prayer: “We can do it if it doesn’t get too zoo-y.”

As it turned out, the couple got ahead of the chaos that day and both were back on track before 10 a.m.

By noon, Foster transformed the morning’s milk into cheese. Their Bay Blue was settling in tubs for that purpose on steel tables. After gravity and time combined to compress the cheese into a wheel, Foster would use special forks, designed to let the blue mold grow more effectively in the cheese, helping it take on the veiny, marbled look associated with the delicacy.

Cheese always has been the point of Chapel’s Country Creamery, just outside of town on Chapel Road. For many producers, cheese is a sideline, a way of monetizing the milk they don’t sell to one of the national brand distributors. For the Fosters, the plan was to make all the cheese and yogurt they could, and sell the excess milk. As with most small farming, it is a low-profit, high-risk business. Eric manages another area dairy farm for his day job. That, added to selling the milk overage, allowed the Fosters the breathing room they needed to spend the year it takes to find out if a cheese recipe is any good.

When they started, however, the Fosters had to have their cheese processed in Pennsylvania. On the evening before they were to ship their first tanker full of milk, the Amish farmer who was to process it threw out his back. He traveled to town to call Foster and tell her not to send the milk. She had a different idea and asked if he would instruct her in the heavy lifting aspect of the process.

Foster knew little about the Amish. She didn’t know how they viewed women or whether they would accept an “English” working in their plant. And in the second it took for him to answer her, Foster worried she alienated the person responsible for making her product.

Although she studied at one of the most prestigious cheese-making schools in the country — CalPoly in St. Louis Obispo, Calif. — the opportunity to learn hands-on from a craftsman would become critical as the farm grew.

“I wanted control over my product from start to finish,” she said.

A farming accident presented her that opportunity.

The Road to Regulation

Chapel’s Country Creamery was the first in the state allowed to make and sell raw milk cheese. Since raw milk cheese is preferable in many if not most cases, Foster shipped the milk to Pennsylvania in the early years. The Amish would process it and send it back.

Foster was serving her cheese at an event, and when politicians asked if the cheese was really made locally, she answered honestly. It could be, but regulations prevented it. From that party was launched a campaign that developed into a pilot program resulting in raw milk cheese processing being restored to Maryland. Chapel’s Country Creamery was the test case.

From her years accompanying her milk to Pennsylvania and her cheese back home, Foster developed a particular expertise. Once the pilot project was inaugurated, she became an advisor and regulatory negotiator. Compared with other states that allow raw milk cheese production, Maryland is highly regulated.

The expense to get a creamery up and running is significant enough that some producers still elect to ship their cheese to Pennsylvania. Foster is a true believer in cheese, though, and for her, it was about seeing a dream through. She learned a lot about compliance through the process, though.

“It’s a lot easier to go to the state and say, ‘Hey, I want to do this,’ than it is to do it and have them tell you what’s wrong,” she said.

As with any other highly regulated process, the paperwork is worse than the compliance. Cheese-making relies on striking a particular spoilage balance. Taste and health concerns are identical in this business. As a result, Foster spends the bulk of her cheese-making time cleaning, measuring Ph levels and cleaning some more.

Every Chapel’s Country Creamery cheese is evidence of how astounding good cheese can be. Like wine, beer and coffee produced locally, quality cheese can well exceed the new enthusiast’s expectations. As high-quality producers, the Fosters try to remain vigilant against overconfidence.

Last year, they introduced their fresh feta cheese at farmers markets. Foster said she never came home with unsold feta but had a nagging concern its popularity might be tied more closely to trends than to legitimate quality.

To put her fears to rest, she entered the “Cordova White Feta” in the American Cheese Society’s annual competition. The entry fee is expensive but comes with an honest critique from some of the world’s most respected tasters and producers. Her hope was to get some guidance in how to improve the cheese.

The other cheese Foster entered was the Bay Blue, of which she is rightfully proud. The flavor is deep and dominant without being aggressive, and the texture has just enough crystalline edge to make it unique but not quirky.

It was in waiting to hear whether the blue won that her assistant grabbed her arm and shook her, calling her attention to the board. In its first tasting, the Cordova White Feta took third place in the country.

The designation as an ACS honoree gives the Fosters the right to display the ACS symbol on their package and their restaurant customers — places like 1789 in Georgetown and other upscale western shore restaurants Foster jokes she can’t afford to patronize — the right to do the same.

The ACS designation will add up to more than just a boost in confidence for the Foster family. It signals the revival of niche production by small family farms is a cultural shift rather than a trend.