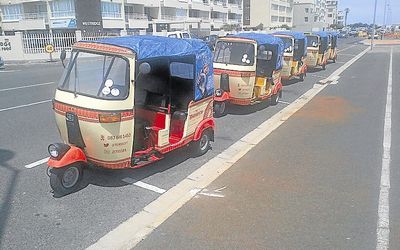 PARK: Monarch Tuksi Company vehicles in Cape Town. The city does not have any policy framework that allows for the licensing of tuk-tuks. Picture: MONARCH TUKSI COMPANY

BUSINESS Day has dedicated much ink to the issue of a tuk-tuk public transport service and in the process has disseminated, in both reporting and editorial, inaccurate information and superficial views.

The role of Transport for Cape Town is to deliver on this government’s “Vision of Ones” with the objective of transforming public transport from its fragmented and inconvenient structure to an integrated multimodal network and service that is commuter-focused.

The City of Cape Town has a big vision to achieve and the launch of the transport authority was merely one step in that direction.

We are, however, making significant progress on reaching the various goals that make up our vision.

An integrated multimodal public transport service can only be achieved when we have the right plan in place. That plan is the Integrated Transport Plan (ITP), supported by the Integrated Public Transport Network (IPTN).

Our current ITP was adopted about five years ago before the promulgation of the National Land Transport Act, before tuk-tuks were recognised as public transport vehicles, and before the establishment of Transport for Cape Town and the Vision of Ones.

We have been working on a new ITP, aligned to the act and to the enhanced public transport objectives of this government.

We expect to adopt the new ITP later this year. In addition, our IPTN is also being prepared.

The city is not the operating licensing authority for public transport vehicles. This function is performed by the Provincial Regulating Entity (PRE). We are simply consulted on the applications received by the PRE and given the opportunity to indicate whether we support the applications or not.

The City of Cape Town’s position on all applications is informed by a number of factors, including most importantly our ITP.

While Business Day has demonstrated sympathy for the Monarch Tuksi Company in Cape Town — on the basis of the novelty and creativity of the project — the City of Cape Town is responsible for an equitable response to 80 similar applications (that we are aware of); and we have to be concerned with planning a public transport system where each mode, including tuk-tuks, has an identified role to play within one network that is focus ed on the needs of the commuter and not the transport operators.

Our new ITP will address the role of tuk-tuks as an appropriate public transport vehicle and mode for short “last-mile” journeys and our IPTN will identify the appropriate routes where this mode of transport will sensibly integrate with other modes.

Our refusal to support ad hoc tuk-tuk licence applications is based on the planning and political will to deliver to our residents the best public transport network and service that we can: a fully integrated multimodal network with services operating according to an aligned schedule, where our commuters can use one payment method for an entire journey, and can travel conveniently, affordably and safely throughout the day and night.

Supporting some, or all, of the tuk-tuk licence applications, on the dawn of a new transport plan for this new transport vision, would create conflict with advanced plans and would entrench the operator-dominant status quo.