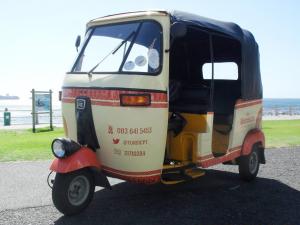 Monarch Tuksis are made in India by Bajaj. Their 197cc, single-cylinder two-stroke engines have a distinctive sound that gives them their generic name, tuk-tuk.

Tuk-Tuk public taxis, used in many cities worldwide, are to be included in Cape Town’s new transport plans soon.

This comes after owners of the Monarch Tuksi Company, brothers James and Daniel Clarence from Johannesburg, appealed against the city’s decision not to grant them more than one licence as there was no provision for tuk-tuks in the transport plan.

The brothers said they had been forced to reconstruct their business plan as they had been told “at the last minute” that their request for 10 licences had been denied. This was after they had sold up and moved to Cape Town to start the business.

“ We feel like we’ve been pushed into a corner.”

James Clarence said: “We went through the entire gazetting process and we received a letter stating no opposition. We then heard that it was not part of the city’s transport plan.”

However, the city’s mayoral committee member for transport, roads and stormwater, Brett Herron, said tuk-tuk services were likely to be included in the revised plans for 2013 – 2018.

“The plans will be presented to the provincial transport portfolio in March and should be out for public comment thereafter,” he said.