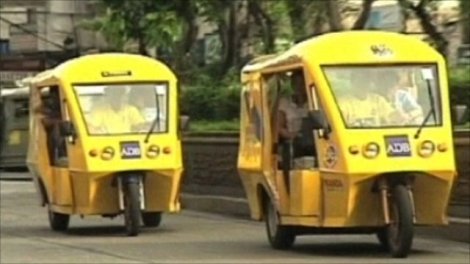 The Philippines will be introducing electronic tricycle taxis to replace its petrol-fuelled models, which could cut carbon dioxide emissions by a quarter of million tons.

The Asian Development Bank (ADB) will provide $300 million and The Philippines government will provide an additional $99 million to the project. Tricycle taxis are one of the Philippines’ most widely used forms of transport for travelling short distances, but they are also responsible for more than two-thirds of air pollution.

The ADB estimates that there are 200,000 tricycles in the Manila metropolitan region alone, and about 3.5 million in the entire country. The tricycles use nearly $5 billion of imported fuel every year, produce about ten million tons of carbon dioxide, and are the biggest source of particulate pollution in urban areas. The World Bank estimates that the total economic burden of air pollution to the Philippines economy is more than $150 million each year.

‘Every 20,000 e-Trikes that are introduced to Manila’s streets will save the Philippines 100,000 liters of foreign fuel imports each day, worth US$35 million annually,’ says the ADB’s principal energy specialist, Sohail Hasnie.

E-Trikes will use lithium-ion batteries, a form of battery widely used in consumer electronics such as mobile phones, which can be recharged 2,000 times before being replaced. A test run earlier this year showed that tricycle operators more than doubled their incomes when using e-Trikes.