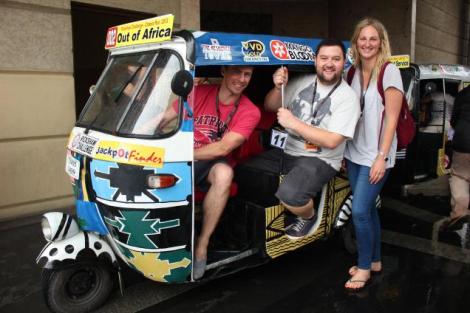 Colour and Character Dressed up on the big day. Via The Hindu

As a pageant of strikingly painted tuk-tuks was steered out of The Residency Towers for the eighth edition of Rickshaw Challenge — Classic Run, by a motley group of merry men and women representing countries across continents, it was clear that a little imagination is all it takes to transform the banal into the sublime. Yes, the Rickshaw Challenge, which offers a bouquet of motorcycling adventures across India around the year (check out www.rickshawchallenge.com), has indeed elevated the humble auto rickshaw into an Indian cultural icon.

The teams from the U.K., Spain, Canada, Australia, South Africa, Switzerland, France and Hungary taking part in the Chennai-Tiruvananthapuram adventure (on till January 7), signed up for this travel-and-tourist experience purely because the auto rickshaw is central to it. For these participants, the tuk tuk is a novelty. Low-powered three-wheelers ferrying passengers exist in many developing countries of Asia, Africa and Central and South America as a low-cost mode of transport. But in the developed West, tuk tuks are predominantly patronised as a novel form of passenger transport or as an effective tool in promoting green drives.

Among the European countries, Italy is the odd one out. Its engagement with the tuk tuk dates back to 1940s, when it made its appearance as a goods carrying vehicle. Later, the notion of three-wheelers for people gained ground. Today, they are a popular mode of transport in Italian localities abounding in constricted roadways.

In the other countries of Europe, tuk tuks are a more recent introduction. They have been making their way into the Netherlands since 2007, mostly as imports from India and Thailand. Fitted with CNG kits, these tuk tuks handsomely address the question of pollution control.

A lesson in history

The history of tuk tuks in U.K. is a bit longer. Since 1999, these machines have served as a vehicle for tours of specific locations, fixed passenger routes and street marketing drives. Despite this relatively longer run, the tuk tuk is hardly a common vehicle in the U.K., a fact supported by the regular participation of British teams in the Rickshaw Challenge over the last eight years.

Part of the reason could be that the Rickshaw Challenge imparts the tuk tuks more colour — literally — and character. Participants are encouraged to name their rickshaws and endue them with anthropomorphic features. The manner in which the Challenge has promoted an unlikely rally machine is paralleled by only a few other attempts, which include the one during the 2011 edition of the Budapest-Bamako rally, when an invitation was made to owners of old, beat-up vehicles or those gloriously unsuited for the gruelling long-distance trip. It could be anything — an ambulance, a commercial vehicle, a vintage car or motorcycle. The owner of the machine that made the cut — the most ill-equipped to meet the challenges of the journey — was granted free entry.