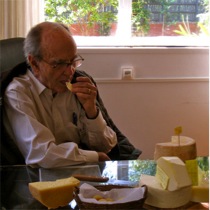 Five years ago Gabriel Donato Andrade founded the NGO SerTãoBras, and were he to start today, he says his focus would be the same: to support the Minas Gerais producers of artisanal raw milk cheeses. Born in the Minas town of Arcos, and used to eating the famed cheeses of his State since childhood, he sees the small producer as able to make cheese that is not only good tasting, but good for the health. “And as well, it is a national product, part of our tradition and cultural heritage, and a viable means of income for the small producer.”

His reaffirmed support tells there is yet a lot to be done so that the good artisanal cheeses from Minas Gerais and other Brazilian states reach consumers outside the regions of their origin.

Gabriel Andrade came to São Paulo to visit the new SerTãoBras headquarters, which moved from Calciolândia—near Arcos, his native town- to São Paulo, in 2012. During his visit he revealed to the SerTãoBras team his preference for the well-matured cheeses, while appraising an assortment of cheeses brought from Minas Gerais.

The taste and aroma of the cheeses stirred his memories. He spoke of the cheese his mother used to make and which he ate fresh as a child, because the region of Arcos does not offer the terroir proper for maturation.

Gabriel Andrade said also that he was wakened to the cause of cheese influenced by his daughter, Li An, with whom he visited in 2005 the town of São Roque de Minas, in the Canastra Mountains, and tasted of the region’s cheeses.

“We went to visit the cheese producer, Gaspar, and asked him why his cheese could not be found in São Paulo. It’s when I found out that selling outside the state was illegal, that the cheese could only reach São Paulo clandestinely,” says Gabriel Andrade. It’s also when the idea of SerTãoBras started being matured.