The following graphic has been making its way around the Internet this weekend.

I was intrigued, but suspicious. I don’t like to send things around, or post them on the blog, if something doesn’t smell right (no pun intended, as we are talking about wonderfully stinky French cheese). So I did a little digging, and here’s what I found.

The graphic is kinda right.

According to John Sheehan of the FDA’s Center for Food Safety and Applied Nutrition, in the 1980s both countries agreed that all soft cheeses from France would be made from pasteurized milk in plants certified by the French government. This followed the detection of the harmful listeria bacteria in some French Brie.It seems that, of all things, an outbreak of Typhoid in Canada in the early 1940s was linked to Cheddar cheese made from raw milk (call her, Typhoid Elsie). Fast forward to 1950, and the FDA decides to do something about the dangers of stinky French cheese, and bans the sale of any imported cheese from raw milk that is not aged for a minimum of 60 days (a ban on domestically-produced cheese was, reportedly, instituted a few years before that).  The thinking was/is that the curing process kills the bacteria (and recent research suggests that even that may not always work).
And so began America’s cheese panic.

So, the cheeses in the graphic are not banned per se.  They’re only banned if they’re made with raw milk that hasn’t been aged a minimum of 60 days.  And if they’re made with pasteurized milk, they’re fine.  Thus, newer French Brie cheese made with pasteurized milk can be sold in the US (even though it’s reportedly less tasty than the “real” French version – and part of the lost flavor of some French cheeses comes from the fact that their peak flavor comes at a time “less” than 60 days).  Sadly, there’s a section of the site I link that appears to note some exceptions to the rule, but the section isn’t written in complete sentences, so it makes no sense.  So I did some more research…

What I found was that there seems to be another restriction, beyond the 60 day rule. This from an article in 2005:

2005 was around the same time that the FDA cracked down on French cheese entering the US – previously they apparently had overlooked some of the “illegal” cheeses. Now they were cracking down even on some cheese aged over 60 days – possibly for legit reasons, possibly as retaliation for a trade dispute.

And there’s talk of banning raw milk cheese all together:

But in recent months, two recalls involving e. coli in raw-milk cheese have brought that law into question: in November, at Bravo Farms, near Fresno, then in December, at Sally Jackson Cheese, in Washington State.

David Acheson, a former associate commissioner for the U.S. Food and Drug Administration, says laboratory tests have suggested that e.coli O157, and possibly other microbes, as well, can survive the 60-day aging process.

On average, there are about 40 reported cases a year of people getting sick from raw-milk cheese, nationwide, according to the Centers for Disease Control. During a 15-year period between 1993 and 2008, two people died from those illnesses.

That’s a small fraction of the outbreaks that have been traced back to ground beef, for example, and the number has stayed fairly constant. Still, the FDA says raw-milk cheese is a growing concern.

Two people died over fifteen years from eating raw milk cheese.  Significantly more died over that period from guns, about 450,000 people (that includes suicides, but hey, we don’t let people intentionally kill themselves by eating French cheese, so why allow guns?).

In the end, I couldn’t confirm that any of the cheeses listed in the graphic above are actually “banned” in the US, because there are versions of them – with pasteurized milk or aged over 60 days – that are permitted for several of them (I didn’t check them all).  The graphic indicates, for example, that French roquefort (i.e., blue cheese) is not permitted into the US.  That’s not true.  You can buy the French “President” brand blue cheese in the US – I  have.  The same goes for the graphic’s mention of Camembert.  Obviously, the American versions are either pasteurized or aged over 60-days.

Now, the graphic would be correct if it got a little more specific and, say, added an asterisk noting that the original, “true,” raw-milk-aged-under-60-day versions of these French cheeses are banned in the US.  Try this: 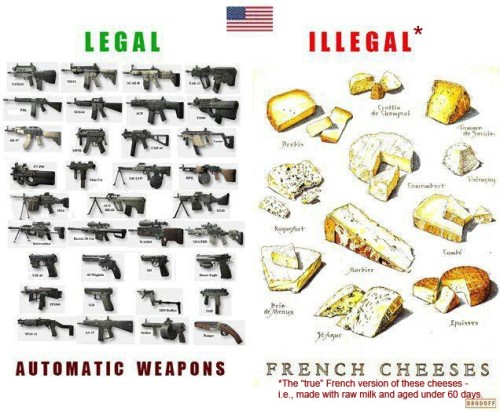 And that’s our food science lesson for the day.  At least this explains why I have such a hard time finding a good tangy French chèvre at the market in the states.

One response to “is it easier in America to buy a gun than French cheese?”