Erin Harris is taking cheese to the next level in London.

The owner of the Cheese Poet in London’s Farmers’ Market at the Western Fair wants to wean people off factory-produced cheeses and introduce pallets to handmade artisanal cheese.

Harris’ passion for locally produced cheese blossomed while she was working at a restaurant in Toronto, where she frequented the St. Lawrence Market to sample cheeses. 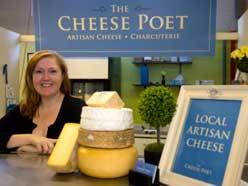 Erin Harris runs the Cheese Poet booth in the Western Fair Farmers’ Market. She will even do catering, like creating cheese platters for weddings. (MIKE HENSEN, The London Free Press)

“The St. Lawrence offers things that we could never get here in London, and that’s basically the direction that I want to go in,” she said. “I have a real love for cheese, so I’m coming (at it from) a different angle.”

Armed with an impressive food education — Harris is a Red Seal chef who studied culinary arts at Fanshawe College and Italian cuisine at Humber College in Toronto — she is changing the way people eat and think about cheese.

Her shop offers cheese platters, ranging from $500 to $750, for weddings and other large functions. The bride and groom get to do a cheese tasting to pick what goes on their platter.

Harris, who jokingly refers to herself as a cheesemonger, will even work such events, educating guests on the cheeses they’re tasting.

Sharing her love and expertise is one of Harris’ passions. She’s teaching four cheese seminars in the fall at Jill’s Table on King St., where she’ll give lessons on how to make ricotta and pull mozzarella.

Harris, 32, has a master’s certification from the New York-based Artisanal Premium Cheese Centre, where she gained a better understanding of how cheese ripens.

“This course was really about giving me a base knowledge of cheese all over the world, and why cheeses in our area are being made the way they are,” said Harris, who was the only Canadian in the class.

Harris says business has been booming since moving into the farmers’ market in March.

The Cheese Poet, named after the 19th-century Ingersoll poet James McIntyre, famous for his writings about cheese, also sells charcuterie, jams and crackers — all of it handmade.

Harris is looking for a store to expand her business. While she considered staying in Old East Village, she’s opting to move downtown to capitalize on the daytime shoppers.

“I just haven’t found the right space,” she said.

It’s not uncommon for businesses to start in the market before moving to a new location, says farmers’ market owner Dave Cook.

“We hope to retain them, but we also want to see them grow,” said Cook, who calls the market a “business incubator.”

“People are willing to give things a new try in the market. We’ve got a great community in there. That community is hungry to support independent, small businesses.”

Every weekend, the Cheese Poet offers a new gourmet grilled-cheese sandwich with a seasonal twist. The latest was a five-cheese blend with capocollo and strawberry red-wine confiture.

“There’s a huge following. There’s people that come every single week,” she said.