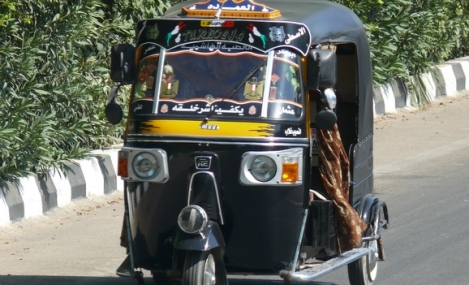 It seems that tuk-tuks (three-wheeled passenger motor vehicles) will soon be all the rage in Egypt, especially after receiving acknowledgement and praise from new president Mohammed Morsi during his popular speech in Tahrir Square.

On Wednesday [July 11], the Cairo office of the United Nations Population Fund declared the tuk-tuk a hero that helps to reduce the mortality rate of pregnant women in Egypt’s countryside. These honors were bestowed upon the vehicle as part of Wednesday’s festivities that celebrated World Population Day in the Egyptian capital.

Cairo, which announced on World Population Day that the country’s population had jumped to 81.4 million in 2011, hosted the festivities despite the reigning confusion in the political scene. Political chaos should not be allowed to distract from a cause that is dear to every Egyptian pregnant woman! According to experts, the health of Egyptian mothers greatly improved during the last two decades, despite the presence of grave problems that still need to be addressed and resolved. The regional office of the United Nations Population Fund announced that only 58% of all births in the governorate of Minya occurred under medical supervision, and that only 48% of pregnant women were under medical supervision during their pregnancies.

Given that the level of care that pregnant women receive differs vastly depending on the province, the focus of this year’s World Population Day will be to improve the level of that care in certain provinces. Considering that the tuk-tuk has become a symbol of the times with its prevalence in the vast majority of villages, hamlets and even densely populated neighborhoods and slums in large cities, health officials had the brilliant idea of using the vehicles to transport midwives to the bedsides of pregnant women. The tuk-tuk will be especially useful in areas where medical care is difficult to receive due to roads that are too narrow or in a state of disrepair.

The documentary “The Tuk-Tuk Nurse-Midwife: Reducing Maternal Mortality in Upper Egypt” sheds light on this issue. The United Nations Population Fund classifies midwives as one of the categories of people who facilitate progress in the field of prenatal care, especially in poor and isolated areas.

Babatunde Osotimehin, Executive Director of the United Nations Population Fund, emphasized the grave necessity to preserve the health of women and girls. He also said it is necessary to take full advantage of women’s ability to develop their countries, and to empower them to plan for their own futures and those of their families.

It is worth mentioning that around 222 million women worldwide seek to delay or prevent pregnancy, but lack access to modern birth control methods. Furthermore, help could be made available to prevent 79,000 women from dying in the prenatal or birthing phase. In addition, this could result in the avoidance of the deaths of approximately 1.1 million infants. The strangest part is that all of this can be achieved with the help of a tuk-tuk!