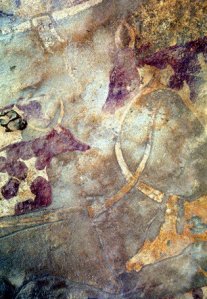 A rock art image, between 5,000 and 8,000 years old, depicts domesticated cattle. It’s from Wadi Imha in the Tadrart Acacus Mountains in the Libyan Sahara. Dating of residue in food preparation bowls confirms milk consumption in the Sahara 7,000 years ago. (Roberto Ceccacci Â© The Archaeological Mission in the Sahara, Sapienza University of Rome )

Residues of milk fat on pottery indicate that Africans in what is now the Sahara desert were milking cows and processing the milk into cheese, yogurt and other products 7,000 years ago, European researchers reported Thursday. Ancient rock art throughout the region shows herds of cattle and even people milking them, but dating the art has been a problem. The new evidence provides the first reliable date for how long the practice of dairying has been carried out in the region.

The new data were reported in the journal Nature by a team headed by chemist Richard P. Evershed of the University of Bristol in England. They extracted organic molecules known to be present in milk and used radiocarbon dating to determine their age. His team had previously used the technique to date dairying to 9,000 years ago in the Near East, to 8,000 years ago in eastern Europe and to 6,000 years ago in Britain.

About 10,000 years ago, the Sahara was a wetter, greener place. Hunter-gatherers living in the area lived part time in settlements, used pottery, hunted wild game and collected wild cereal grains. As the region began to dry out, the early inhabitants were forced to adopt a more nomadic lifestyle and cattle herding became a more important part of their lifestyle.

The unglazed pottery the team used in its study came from the Takarkori rock shelter in the Tadrart Acacus Mountains in Libya. Because the pots were unglazed, fats from milk were able to seep into pores during cooking and remained trapped there permanently. Processing a variety of pottery shards from the region, the team found that about half of the pots had been used to prepare dairy products. This confirms for the first time, the researchers said, the early presence of domesticated cattle in the region and the importance of milk to its prehistoric pastoral people.

“We already know how important dairy products such as milk, cheese, yogurt and butter, which can be extracted repeatedly from an animal throughout its lifetime, were to the people of Neolithic Europe, so it’s exciting to find proof that they were also significant in the lives of  the prehistoric people of Africa,” said Bristol graduate student Julie Dunne, a co-author of the paper. The processing of the milk into finished products also helps to explain the persistence of the lactose intolerance gene to modern populations: people bearing the gene are generally able to tolerate finished dairy products better than they are raw milk.