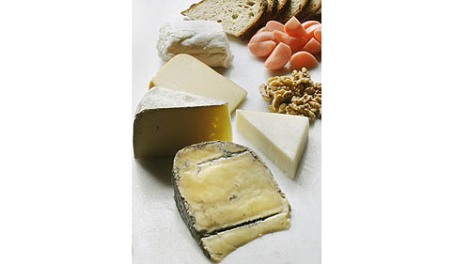 Pittsburgh’s Slow Food Organization works toward a global food system that is healthful for people, animals and the planet, with fair wages for food workers. Now, they’ve added on a smaller, complementary goal: Supporting the growth of local artisan cheesemaking.

“Dairy is part of Western Pennsylvania’s heritage” said Leah Smith, members services manager for the Pennsylvania Association of Sustainable Agriculture. “We have a few PASA members who are producing great cheese in Western Pennsylvania, but there is this really exciting growing market and interest for artisan cheese, so there’s a great opportunity for new cheesemakers, and for our cheesemakers to develop.” Cheesemaking, she pointed out, is also an important way for dairy farms to add value to their product, so developing an artisan cheesemaking community also is “a great economic strategy.”

So how do small-scale cheesemakers improve their craft and develop their businesses? “The truth is that most … have little time — and less money — to sign on for skill-building and inspirational experiences or other intensive training sessions away from the farm,” said Susan Barclay, co-leader of Slow Food Pittsburgh. The group wants to help by awarding a $2,500 stipend to a local cheese professional. The winner of the grant can use the money to train with a distinguished cheesemaker, teacher or affineur (someone who specialized in aging cheeses); attend the American Cheese Society conference in August in Raleigh, N.C.; or stage at a restaurant with a distinguished cheese program. The group hopes that this year’s award will become an annual Pittsburgh Cheesemaker’s grant, said its other co-founder, Virginia Phillips.

Slow Food has found support in the Pittsburgh restaurant community, where many chefs like to choose local, but usually find themselves looking elsewhere for top-notch cheeses. A group of local sous-chefs are planning a dinner to raise money for the grant. Organized by Jamilka Borges, chef de cuisine of Legume Bistro in Oakland, the dinner will feature sous-chefs Chad Townsend, Salt of the Earth; Matt Huggins, Spoon; Dustin Gardner, Casbah and John Heidelmeir, Root 174; and Sarah Susan, a Legume server planning to launch Heirloom, an artisanal pastry shop.

Courses will be paired with wines selected by Legume’s sommelier Caroline Matys, and servers from Legume and other participating restaurants also volunteered.

An early version of the menu included spelt dumplings with fava beans and stinging nettle tea broth; beer-braised pork belly with garlic scapes, toasted quinoa and lacinato kale; and a lemon bar with cream and mulberry compote, with more courses to come.

Contestants must live and work in Western Pennsylvania and be professionally engaged in making traditional cheese, or sourcing and caring for quality artisan cheese for resale or restaurant service. Farmstead-scale operations will receive priority.

To be considered, applicants should submit statements of purpose, 500 to 700 words in length on the subject:

“Better Cheese for Pittsburgh: Train Me and I Can Help.”

Essays should be e-mailed by June 20 to Susan Barclay at stbarclay13@verizon.net with the subject line, “Cheese for Pittsburgh.”

The winner will be selected by a panel of judges consisting of Trevett Hooper of Legume, Kevin Sousa of Salt, Keith Fuller of Root 174, Brian Pekarcik of Spoon and Bill Fuller of the Big Burrito Restaurant Group, Amy Thompson, a cheesemonger from Lucy’s Whey artisan cheese shop in Manhattan; Melanie Dietrich Cochran of Keswick Creamery, a Pennsylvania cheesemaker who has won national honors; and representatives from Slow Food Pittsburgh and PASA.