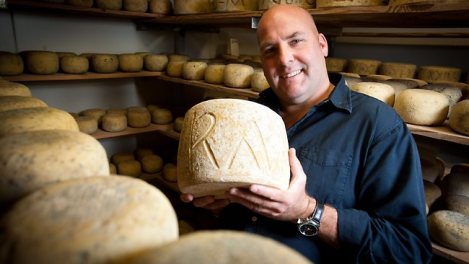 TALK to Nick Haddow about life and food, and you’ll find “challenge” a recurring theme.

There was his first year as a professional cheesemaker at Pyengana, northern Tasmania, leading an isolated life that put a strain on relationships; the year his fledgling Bruny Island business was forced out of rented production facilities at a particularly bad time; and the year a single cheese tested positive for listeria, nearly breaking the business.

Not that this renaissance man – cook, writer, marketer, television personality, cheese judge and retailer – is someone who finds everything a challenge. Rather, his has been a career tackling obstacles in an industry that probably favours the conservative over the maverick. And only someone with drive, and a streak of individualism, takes on the challenge of trying to make non-industrial cheese in Australia.

Regulation thwarts all but the most persistent. Fighting for the right to make raw milk cheese is probably the greatest challenge the 40-year-old has set himself. And he is still only part-way there.

Raw milk has been the most emotive issue in Australian food for decades, and right now Bruny Island Cheese Company’s C2, a hard, cooked-curd cow’s milk cheese matured for a minimum of six months, is the only nationally available unpasteurised cheese made in Australia.

Haddow doesn’t want it to be his last.

At one extreme on the raw milk issue are tub-thumpers who believe the only way individual cheeses can be made – cheeses that reflect pastures and a single herd – is with milk that, in the traditional European farmhouse manner, has not been heated and held at 72C for 15 seconds (pasteurised).

At the other end of the spectrum are those who say such a measure could destroy an industry by opening the floodgates to the perceived risk of disease posed by unpasteurised cheese (listeria is one of the bacterial diseases thought to be easily transmitted by the consumption of raw milk). They are usually cheesemakers – and businesspeople – who use co-operative milk and let their production and maturation techniques craft the finished cheeses.

Somewhere in the middle is Haddow. Working with the Tasmanian Dairy Industry Authority over the past five years, Haddow has produced a cheese made from milk from a single herd that has not been pasteurised, but achieved equivalence (see breakout) under Food Standards Australia New Zealand guidelines.

Despite the existence of this provision, it’s an opportunity few have taken.

The hoops are many, and expensive to jump through. “I would argue that those regulations are good regulations, but they also need to go to the next step,” says Haddow on the veranda of his purpose-built factory and cellar door cafe on this southern Tasmanian island.

It’s an idyllic spot. Established gums surround the cheesery, the D’Entrecasteaux Channel laps at the island’s shore 200m away, and the charming old cottage Haddow and his family call home is a good drop-punt away. In a wood-burning pizza oven beside the cafe’s courtyard, the staff’s lunch – a local lamb casserole to be eaten with polenta – does its thing, slowly.

If you have to go to work, this is the way to do it.

According to Australian cheese authority Will Studd, challenging the status quo on dairy regulations is a “brave move” for any producer because of the risk that local state dairy authorities will find reasons to make life difficult.

You may know Haddow’s face from the SBS series Gourmet Farmer, on which he is part of the foodie trio that includes the author Matthew Evans and chef Ross O’Meara, other mainland imports to southern Tasmania (O’Meara farms pigs on South Bruny Island while Evans farms and writes from near Cygnet). Together, they own a small food shop in Hobart – A Common Ground – selling their own goods and a few other tightly scrutinised products.

Haddow has been around food most of his adult life. He grew up in Adelaide at a time when names such as Lew Kathreptis, Cheong Liew and Maggie Beer dominated the culinary landscape. He studied hotel management. One of the young Haddow’s first jobs was cooking at Don Dunstan’s Don’s Table.

Working at a winery cafe in Clare, he thought: “Why not make cheese?” The first cheese he made was a white mould goat’s cheese, and he enjoyed the challenge.

But it was a workshop run by chef Liew and Victorian cheesemaking elder statesman Richard Thomas in 1992 that grabbed the tiller of his life and put him hard about.

Cheese took him on a Queen’s Trust grant to London, where he worked with Randolph Hodgson of Neal’s Yard Dairy, one of Britain’s most important cheese businesses. It brought him home to help set up the cheese shop at Stephanie Alexander and Will Studd’s Richmond Hill Cafe & Larder, as it was then. It took him to work in regional Victoria with Thomas at Meredith, Milawa and the Yarra Valley. Somewhere between it all he worked in Sydney for a dotcom wine business and lived in Japan with his wife to be, Leonie Struthers.

But Haddow’s first proper job as a professional cheesemaker was with John Healy at Pyengana in 2000-01. “It was a privilege to be involved there, making a true farmstead cheddar from our own herd,” he recalls. However, “it was a tough year and ultimately a failed experiment.” On the cusp of heading back to Japan, the couple visited Hobart and Bruny one long weekend. Something clicked.

“It was an absolute feeling of connecting with this place, like coming home (despite) having never been there,” he says of the place where he now lives. In 2001, Haddow and Struthers relocated south and started making cheese under the Bruny Island Cheese Company label, initially at Grandvewe Dairy’s premises and then at their own facilities on the island, still buying milk from different Cygnet-region farmers.

The year 2007 was his first making cheese under his own roof. Two years later came the annus horribilis of a positive listeria result in a tested cheese.

“It was the worst and the best period of my life,” he says. “It tore the heart of me.

“It’s incredibly personal. You make so many sacrifices in the hope of a pay-off, and when you think that pay-off might be ripped away, it hurts.”

Production stopped for more than two months. The authorities were unable to determine the precise cause. “But it made me review everything,” Haddow says. “It made (it) a better business and (me) a better cheesemaker. It happens a lot, you just don’t hear about it.”

Most cheesemakers would have been satisfied to put the issue behind them. Haddow, instead, set out to exploit new rules that made raw milk cheese production technically legal for the first time in decades.

“The legislation requires a cheesemaker to really want to make raw milk cheese, and there are plenty – the majority in Australia – who do not want to, which is why this is taking so long to get off the ground,” he says. “It’s being driven by a few people with a little bit of support from consumers. It’s not being driven by industry.

Getting C2 to market meant working with the Tasmanian Dairy Industry Authority.

He says that while there was “some consternation” among some of his federal colleagues when he broached the subject of Bruny’s raw milk cheese, ultimately his body is charged with making sure the Food Standards Code is met.

“We have to have confidence in the producers” is how Sandman puts his approach to unconventional applications from producers such as Haddow. He says the TDIA worked with the cheesemaker to ensure not only that the code was met but that additional steps, in terms of dairy auditing, milk testing and cheesemaking techniques, were implemented. “We need to see objective evidence all of the time,” he says.