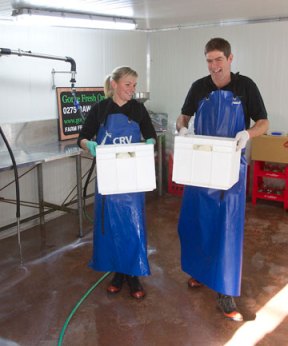 WARWICK SMITH/Fairfax NZ CHEMICAL FREE: Daniel and Jenny Sproull carry crates of organic milk to the chilled delivery wagon. They have an organic dairy farm near the Manawatu Gorge.

Raw milk sales are growing as more people are educating themselves on what they believe healthy food is. Jill Galloway talks to Daniel and Jenny Sproull, organic milk producers near the Manawatu Gorge.

Daniel and Jenny Sproull see themselves as conventional – farming the way it was before all the chemicals were introduced.

For them, organics was a natural progression.

They are passionate about producing high-quality milk the way it’s meant to be and hope people will always have the right to choose to buy it before it gets “homogenised, pasteurised and buggerised”, says Mr Sproull, laughing.

Producing organic milk means not using antibiotics such as penicillin, chemical drenches or fertiliser like urea and superphosphate on the farm.

There are many upsides, say the Sproulls, and one is they spend very little on vets these days.

“We used [to] have the vet once a week on farms we sharemilked. Now, farming organically, we haven’t needed a vet for the past six years,” Mr Sproull says.

They have next to no problems with lameness, cows cycling, milk fever, and of cow health generally, he says.

The Sproulls have three children who have all grown up with organic milk, and know no other type.

“Though our daughter went on a school camp recently and said she had to drink `blue-top milk’, which she didn’t like,” Mrs Sproull says. They are avid supporters of raw milk.

“We have 400 regular customers a week, from single mothers, lawyers, doctors, police and other farmers included.” The most they sell at one time is 16 litres to a husband and wife with five children. “They all know through word of mouth. We don’t advertise,” Mr Sproull says.

Under existing legislation they can sell five litres to a person at any one time.

Mr Sproull is a full-on farmer, he loves farming and milking and is larger than life. Mrs Sproull is quieter and just gets on with the work at hand. Bottling the organic milk has become her domain.

There is a food grade room where the milk is bottled and put straight into a chiller.

The core of their business is their milk supplied to Fonterra and they have separated the bottling business, a little of which is sold from the farm gate.

They also deliver prepaid milk to two places in Palmerston North, one in Feilding and one in Ashhurst.

“It’s easier for people to pick the raw milk up at a drop-off point, than have to come out to the farm,” Mr Sproull says.

Drop-off points have chillers, and they give the milk to people who have already paid the farm as each bottle is allocated a customer. There is no mark-up (there can’t be as under law all payments have to be made at the farm).

“There is extra foot traffic for the business acting as a collection point.”

At the moment the Sproulls have United States Department of Agriculture accreditation, which Fonterra needs. The co-operative now does not pay a premium for organic milk in Manawatu unless seeing out an existing contract. Its focus is on organic milk in Waikato.

“Our cows are only grass fed. In our pastures we have plantain, cocksfoot, ryegrass, clover and chicory. A real salad,” Mr Sproull says.

If there is a grass shortage, hay or grass silage is fed made from the farm’s runoff.

They will keep on with some form of organic certification in the future, regardless of Fonterra not paying a premium for it.

At the moment the Sproulls are milking 35 cows and keeping their bottling business going. For more than 10 months, they milk the whole herd of kiwi cross and jersey cows – 160.

“I have worked on many farms and thought if we ever get our own farm I’m going to do things different, a more natural way to farm,” he says.

The Sproulls say their cows are less stressed and happier and healthier as a result. “Being observant and knowing your stock is one of the most important things in farming,” says Mr Sproull.

They have a fulltime worker and Mrs and Mr Sproull both milk.

“I’ll never go back to farming that causes health issues in stock as I believe a healthy cow produces healthy milk, which is a whole food,” Mr Sproull says.

About a quarter of the milk is cream which rises to the top and this varies depending on the time of the season.

“Some people like to let the milk go sour, some like to make butter and cheese, others just like to drink milk that they know where it’s come from – grass. We put a date stamp on each bottle, so customers know how fresh it is,” Mr Sproull says.

They often get information about healthy food from the customers.

“Whatever people want to eat, it has to be their choice. It’ll be a sad day when government, through a food act, tells us what we can eat,” he says.

Getting back to basics is what drives them.

“There was an old Maori came to see if he could take some young guys eeling in our creeks. `Yeah, no problem,’ I said. He wanted them to know not all food comes from the supermarket,” Mr Sproull says.

People are getting further removed from farms and their food source, he says.

Massey University is investigating whether drinking raw milk could protect children from developing asthma and other allergies.

Professor Jeroen Douwes, whose project has just been granted $1.2 million by the Health Research Council (a government agency) says the live bacteria in unpasteurised milk may help the body develop an immune response.

The study will take three years and begins in October. It will be carried out in Wellington, Palmerston North and Auckland.

“We will compare 300 urban families, including parents and children, who drink raw milk with 150 urban families who drink pasteurised milk and assess whether there are differences in respiratory symptoms, allergies and lung function,” Prof Douwes says.

One in four New Zealand children have asthma and it is the most common form of childhood hospital admissions. “Studies of farmers’ children have indicated raw milk may protect against allergies and asthma, but the reasons are unclear,” he says.