Read the inspiring stories of our sponsors below. 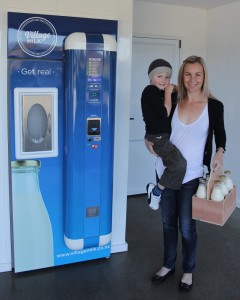 Do you buy cow’s milk? Chances are you’re one of millions in New Zealand who do. Maybe you get yours from the supermarket, or the local corner shop.  Perhaps it comes in a one or two litre plastic milk container  It’s  probably been pasteurised, homogenized and definitely processed, all in the name of hygiene, because that’s just the way it is with milk, right?

I’ve got news for you about Kiwi milk-culture: times they are a-chang’n.

A Golden Bay dairy farming family have set up a very snazzy road-side milk dispenser service called ‘Village Milk’ to serve their community with fresh, hygienic, raw milk any time of the day and night. The Houston family milk twenty two cows and they’re legally allowed to offer you, the discerning consumer, five litres of their milk per visit to the dispenser.

Yes, they call themselves a ’boutique dairy farm” and due to strong community demand (all thanks to good old fashioned word of mouth), the Houston Family are taking this project very seriously. In fact, they’re taking it so seriously they recently took a trip to Italy to research and invest in a state of the art milk dispenser machine that  ensures the whole process is nice and easy, is in line with Kiwi food standards, and will even give change.

Before we go on, it is worth noting that pasteurisation (as opposed to untreated, or raw milk) served a very valuable purpose back in the 1920’s. That was when tuberculosis was spreading through meat and milk, so pasteurisation was the process invented to kill any harmful bacteria. Thankfully, we’re beyond that now. Village Milk cows are TB-free and have been for decades.

These days we also know that pasteurisation, which involves heating the milk to 72 degrees, not only serves the very useful purpose of killing germs, but also kills vital ingredients such as the beneficial bacteria that’s necessary to digest lactose. Go figure. It’s said that many people who can’t tolerate pasteurised milk, can easily digest raw milk.

So after nearly a century of paranoia about milk hygiene standards, consumer demand for good old fashioned raw milk, just the way nature intended it, is beginning to swing milk production back the other way.

I asked Mark Houston what inspired his family to travel this innovative path.

“We’d moved up to Golden Bay for a life-style change after thirty-five years of dairy farming in Christchurch, and we were taking things as they came.  Safe food, and good food quality had become important to us, especially with future grandchildren to think about.  We didn’t just want to rely on the food you buy in supermarkets.  We were tired of hearing about all the pesticides and preservatives and flavours that are added to our foods – and the subsequent links to ill health.

“We purchased a second-hand milking plant and dug out the pit, which had been filled in for use as a cattle yard. Our electrician was soon needed to get everything humming, and after listening to our story he asked if he could bring a billy. From there the news of our ‘new’ milk spread quickly on the grapevine, as it does here in Golden Bay.”

And the Golden Bay community are drinking raw milk from healthy, happy cows.  They’re only milked once a day, it’s all done in a very relaxed manner, and they love being milked – to the point that they can occasionally nod off.  The milk then goes through a series of pipes, and straight into the Village Milk dispenser to be chilled, and collected by an ever growing pool of customers.

Now let’s step back and examine the possibilities that Village Milk have opened up for the future. If this initiative was replicated in your community and you were able to nip down to the local raw milk dispenser with your ‘empties’, it could alter the way our dairy industry functions.  This would mean we’d skip the large scale transport, energy and time we currently invest in taking milk away from its original place of production, to be processed and sent around New Zealand. This could mean we get to simply drink milk that was made in our communities or by farmers living within 100 kms of our homes.

In fact, Richard Houston, business partner and son of Mark and Phillippa Houston, says he’d like to see three more outlets emerging around New Zealand by Christmas, with many more being established under the Village Milk name over the next few years. It’s a business plan with strong roots in community, and with notable health benefits. It’s part of an emerging international trend back to simple, locally produced food.

Is Kiwi milk-culture really ‘a-chang’n’? That, my friends, depends on you.