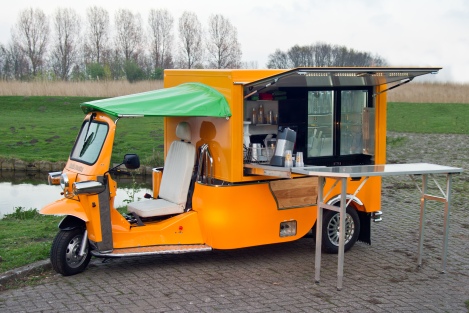 On the 24th of April, the Dutch Company Tuk Factory launched a new vehicle, the e-Tuk Vendo. The e-Tuk Vendo is 100% electric vending van intended for mobile catering. The first customer, Toeti Froeti, will use the vehicle for selling fruit shakes and fruitcups.

The e-Tuk Vendo has an autonomy of 70 kilometers and can be charged during stopovers. The vehicle’s battery is large enough to keep the refrigerator cool while driving. Connecting the e-Tuk Vendo to the mains during a stopover powers the refrigerator as well as the other systems on board – water pumps etc. The Vendo’s right side offers 3 cubic meters of selling space, the rear side offers space for storage. Folding away the side panel creates a canopy, and a working table can be extended from the vehicle.

Tuk Tuk Factory already produced a fully electric e-Tuk Classico (seating 3 persons in the back) and an electric e-Tuk Limo (seating 6 persons in the back). “Making a move towards the e-Tuk Vendo and later Cargo is a small and logic step,” according to Roland Vos, director Tuk Tuk Factory. The incentive to start making these vehicles resulted from the numerous requests we received for vending vans with a fun factor. “We can see a substantial market emerging in the area of distribution and sales of biologic and sustainable foods. The go-local trend drives and accelerates this emerging market need. These initiatives find it important that their distribution and sales van is clean & green, it’s often a side condition in their marketing concept.”

Alexander Mascini, head of sales of Tuk Tuk Factory, says he receives “requests from every country on the globe for electric vending vans, even before the vehicle was launched or developed. The e-Tuk Vendo really gets noticed in the city.” Astrid van Vugt, founder of Toeti Froeti, says: “People react instantaneously and very positively, everybody turns their head, looks and smiles.”

Tuk Tuk Factory has a European type approval for these vehicles and several distributors in Europe. Tuk Tuk Factory expects to sell small quantities initially and to steadily grow the business to a few hundred units per year. De basic version of the e-Tuk Vendo is for sale from 24.000 euro, and the lead time is 3 to 4 months.