The French department of Mayenne, in north west France, was this week the test-bed in preparation for a unique and ambitious attempt by two brothers to travel 45000 kilometers circumnavigating the globe in a tuk-tuk.
In September this year, two British brothers plan to set off from the UK and travel round the world. Nothing unusual in that, you might think, except that brothers Alexander Saxon, often known simply as ‘AJ’ and Kevan Pulfrey plan to accomplish this feat in a Tuk Tuk, a motorised tricycle, common in cities in the Far East but less so on the winding country roads of north west France. The brothers have named their mission ‘Tuk the High Road’ and when I spoke to AJ and Kevan this week, they were confident that they were not taking on ‘mission impossible’.
The French Connection

AJ and Kevan chose Mayenne in Pays de la Loire for the Tuk Tuk’s shakedown trials as their parents are based near Lassay-les-Chateaux in the Mayenne department. This week they’ve been showing off the Tuk Tuk in Lassay-les-Chateaux, Mayenne town centre and across the regional border at Bagnoles-sur-Orne and La Ferté-Macé in Normandy.

The Tuk Tuk alongside the river Mayenne in Mayenne France with the Chateau de Mayenne in the background.

I caught up with the adventurers during their stop next to the river in Mayenne this week to experience the Tuk Tuk first hand.

For the uninitiated, a Tuk Tuk is a three-wheeled vehicle, exposed to the elements on three sides, so-called because of the ‘tuk-tuk’ noise from its 650 c.c. engine. Flat out, it can travel at up to 70 mph (about 112 kph). Tuk tuks are a common sight in the Far East where they are used as taxis, mini buses, delivery trucks and even waste disposal vehicles.

It was in the Far East that the idea for the trip of a lifetime germinated in AJ’s mind. AJ has tackled long road trips all over the world in the past taking in North America, Thailand, Cambodia, Vietnam and Brazil. Tuk the High Road can trace its roots back to a chance conversation in a bar in Cambodia.

“I jokingly asked a Cambodian tuk tuk driver how much it would cost to drive back to the UK. The driver said it was impossible. Not being one to back down from a challenge the seed was planted!”

After returning to the UK, and floating the idea past brother Kevan, the pair decided Cambodia “wasn’t enough of a challenge”. And so it came about that Tuk the High Road was born, a round the world trip, but in reality more like an overland Kon Tiki expedition.

Many hours were then spent scouring Ebay looking for a Tuk Tuk and eventually one was sourced in Manchester, UK. A Tuk Tuk was chosen as AJ and Kevan felt that anyone could tackle a trip like this in a 4 x 4 or off-roader. By choosing a Tuk Tuk for their epic voyage, it ensures the trip will be unique. Not only is a Tuk Tuk more environmentally friendly than a car, it costs less to buy and run. That apart, if all goes to plan, AJ and Kevan can expect to feature in the Guinness Book of Records, so unusual is the concept.

On a trip such as this, there’s no road crew and no following entourage of support vehicles. Kevan Pulfrey is the grease monkey part of the team and has also travelled widely. Apart from being able to take engines to bits and re-assemble them, Kevan is also a Michelin accredited chef in the UK. Fortunately, Kevan has a very understanding employer who has not only agreed to a ‘sabbatical’ that could last for anything up to a year but has also agreed to chip in £1000 to get AJ and Kevan’s fund-raising for their two chosen charities off to a flying start.

AJ and Kevan have selected two UK based charities to benefit from their exploits, Alzheimer’s Society and Stars Syncope Trust. There are personal reasons for their selection. Both their grandmothers suffered from Alzheimer’s whilst Kevan has battled with Syncope, a chronic condition which causes involuntary fainting with a number of associated symptoms such as nausea and temporary blindness.

Once preparations for AJ and Kevan’s trip are further advanced, The Tuk the High Road website will be accepting public donations, with 100% of donations automatically split between the two nominated charities. The brothers are also actively seeking corporate sponsors. Tuk the High Road already have pledges of support from the likes of P & O Ferries for assistance with some of the ferry crossings, Talking Heads who are providing translation services into a multitude of languages and Salomon who have already donated many items of extreme weather clothing and kit.

The idea is to take in wonders of the world, both ancient and modern. 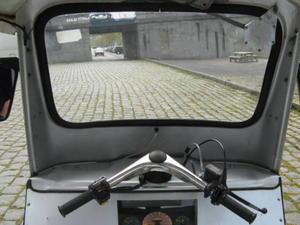 What AJ or Kevan will see as they drive. Mission Control inside the open sided cab of the Tuk Tuk. A bit more basic than the average Range Rover!

The Taj Mahal, the Great Wall of China, the Angkor Wat in Cambodia (quite a lengthy diversion) and Chichen Itza in Mexico all feature. The Eiffel Tower is also on the planned route but AJ and Kevan are keen to listen to ‘audience requests’ for sights to visit and new experiences en route. They can’t promise to go everywhere but they see this unique form of audience participation as a way of generating greater coverage and thus more donations for their selected charities.

If all goes according to plan, September 2012 will see Tuk the High Road back in France and heading to Paris. After that it’s off to Rome and then the ancient Silk Route eastwards beckons with a long haul to China’s Pacific coast.
All being well, AJ and Kevan expect to be back in France in early autumn 2013, emerging from the Pyrenees on the Franco-Spanish border then heading north through France looking forward to what will probably feel like the best tasting croissants in the world when they reach their parents’ home in Mayenne in Pays de la Loire region.
Full details of the provisional route can be found on the route map on Tuk the High Road website. The website also contains a comprehensive FAQ on many aspects of this unique adventure in a Tuk Tuk.
You’ll be able to follow AJ and Kevan’s exploits after ‘Tuk Off’ this September on the Tuk the High Road website. Meantime, you can also get a taste of preparations for Tuk the High Road on Facebook and Twitter.