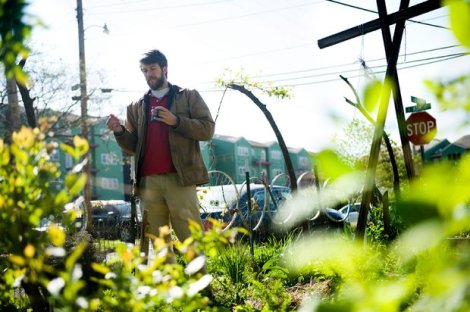 Adam Saunders, board president of the Columbia Center for Urban Agriculture, says food safety issues such as consumption of raw milk tend to draw on emotions to create fear, rather than focusing on educating consumers. By August Kryger

Eric and Joanna Reuter believe a state and local health department bias against raw dairy products is partly to blame for those agencies initially linking raw dairy to an E. coli outbreak.

The couple, owners of Chert Hollow Farm in northern Boone County, said health departments have rushed to judgment in the past, and they cite examples of small farms forced to go out of business or destroy large volumes of food as a result of “health scares.”

“There’s no mechanism for fighting back,” Eric Reuter said. Small farms stand to lose sales and their reputations because of “raw milk paranoia,” he said, but that’s not the case for health departments.

“There’s no equivalent risk factor for them to get their facts right,” he said. 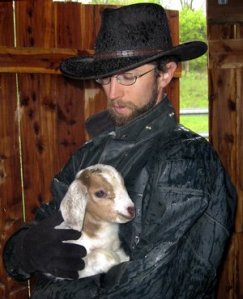 Eric Reuter holds one of his young goats Thursday at Chert Hollow Farm. Reuter’s farm sells raw goat milk, but only to customers who sign a waiver saying the milk will be pasteurized or cooked in a way that makes it safe for consumption. By Jodie Jackson Jr./Tribune

The Reuters would like to see such announcements and media coverage focus on educating consumers about the safe use of raw milk, in the same way public health officials advise consumers to thoroughly cook meat and eggs. The couple’s farm is certified-organic and produces food for 30 families, and those customers also can purchase raw goat’s milk.

Joanna Reuter said many people cite the culinary quality of raw milk as an ingredient in the same way they might use raw eggs.

“We advocate the sale of raw milk, not the consumption of raw milk,” she said. “With educated customers who know how to handle it, it’s fine.”

The Reuters don’t claim raw milk is safe to drink, and they won’t sell it unless the buyer signs a waiver that says the milk will be pasteurized or cooked in a way that makes it safe, such as in home cheese-making or baking. The Food and Drug Administration guideline for home pasteurization is to heat the milk to 161 degrees for 15 seconds or 145 degrees for 30 minutes.

Missouri law allows farmers to sell raw milk or cream at the farm where it originated or after being delivered to a customer. The Columbia/Boone County Department of Public Health and Human Services is opposed to a proposed law that would allow producers to sell raw milk at farmers markets.

Eric Reuter said it seems the local health department equates raw milk with lead paint, and he accused the department of having “an agenda.”

“We do have an agenda,” said Geni Alexander, public information officer for the local health department. “It’s protecting the health and safety of the community.”

Health department director Stephanie Browning said there is “good science” and detailed investigation behind the department’s public announcements. She clarified that raw milk was not labeled as the confirmed cause of the E. coli outbreak.

If the E. coli outbreak were linked to raw chicken, “we’d be hammering home the need to properly handle raw chicken,” she said.

“I don’t view this as an ‘us versus them,’ ” Browning said. “I’m a big believer in trying to buy my food locally.”

Adam Saunders, co-founder of the Columbia Center for Urban Agriculture, said trust between consumers and producers is the foundation of their relationship. Growers not only provide healthy food but also build the local food economy, he said.

Food safety issues, however, get a lot of media attention, he said. “It’s such a draw from people’s emotion that it creates some fear.”

Saunders and the Reuters said they would like to see more public health education focused on known causes of disease and poor health.

“How much attention is paid to pesticides and chemicals?” Saunders asked. “How does that affect our health? We consume those things daily.”

Browning said the health department has a unit that focuses on healthy food systems, healthy activities and prevention of obesity and diabetes.

One response to “Farmers say raw milk bias is misguided”