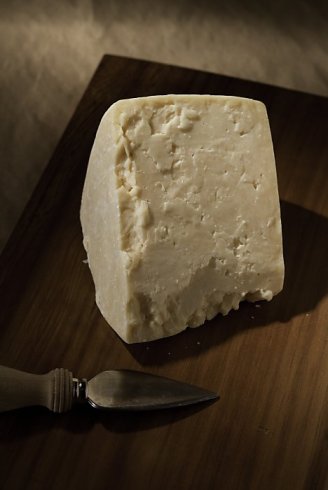 Aged Asiago cheese is often grated into soups, sauces and salads; fresh Asiago is sliced for panini. (By Craig Lee)

The Italian immigrants who came to this country in the early part of the 20th century brought their food ways with them, including a longing for the regional cheeses they left behind, like Asiago and mozzarella.

Some of these newcomers, once settled, began to try to duplicate Old World cheeses with the raw materials they found here. Sometimes they succeeded in creating a near likeness of the cheeses they missed, sometimes not. But over the decades, they have developed some well-priced Italian American alternatives.

Sartori Extra-Aged Asiago can trace its roots to Italy’s Veneto region, birthplace of Paolo Sartori, who left for America at the age of 17 at the turn of the century. Paolo ended up in Wisconsin, where his grandchildren now operate Sartori Foods, producing a range of Italian-style cheeses.

The company’s Extra-Aged Asiago bears only a faint kinship to the Italian original, but it is an excellent value. Perhaps Paolo’s product came closer to the piquant Asiago from his homeland – we’ll never know – but his successors have allowed the cheese to evolve in a sweeter direction, in keeping with American taste.

Mike Matucheski, who has made Asiago at the same plant for 19 years, is a Wisconsin Master Cheesemaker, a respected credential. Master Cheesemakers receive the certification for specific styles of cheese – in Matucheski’s case, for Parmesan and Asiago – and they must spend many years in the dairy trenches and three years in a rigorous course of study to qualify.

Unlike Italian Asiago, which is made with part-skim cow’s milk, Sartori’s cheese relies on whole milk. In keeping with a wheel intended for aging, the curd is cut small and heated to expel whey. The curds are lightly salted to firm them, then molded into roughly 20-pound wheels, pressed, brined, dried and matured for 12 to 15 months.

A cut wedge breaks cleanly and looks almost like cheddar. Yet over the months of maturation, the texture becomes creamier. It feels crumbly on your tongue at first, but it dissolves into smoothness and leaves behind a sweet, nutty, mellow impression.

Matucheski says his cheese has more lipase, an enzyme that produces piquancy, but I find only a hint of that in the finish, a touch of sharpness that adds interest.

The Sartori wheel lacks the full, savory aroma of aged Italian Asiago, but it is an easygoing and affordable snacking cheese for everyday meals.

I enjoyed it with Abita Amber, a malty lager. A Zinfandel or other substantial red wine would complement it, too.

Next up: Big Rock Blue from Paso Robles.