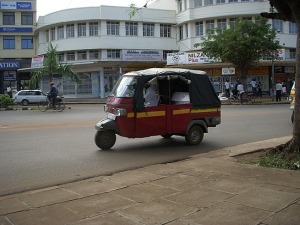 Young people willing to venture into the tuk tuk public transport business can now apply for business support loans from the First Community Bank. This follows the launch of a 10 million tuk tuk financing program dubbed ‘Vijana Tustawi’ by the bank in Mombasa on Tuesday night. The programme is aimed at encouraging entrepreneurship among unemployed youths across the country.

The two-year project, implemented in partnership with the Council of Imams and Preachers of Kenya, will see funds availed for lending to the youth at a reasonable rate. FCB managing director Abdulatiff Essajee said small and micro enterprises are the next frontier for job creation and economic stability in the country. “Through the Vijana Tustawi program, we are telling youths that formal employment is not the only option of earning an income. Youths should venture into entrepreneurship, “said Essajee.

He said the programme creates the financial means with which young people can use to grow their talents in business. CIPK secretary general Sheikh Mohamed Dhor said the programme will help curb unemployment among youths in Kenya. He raised concern over the large number of unemployed youths in the country which has seen majority of them associated with drugs and crime.

“Access to employment has been on the decline and the bigger percentage is youths who have had to bear with the brunt of this saddening reality. We want to partner and mobilise investment funding for youths in Mombasa and the rest of the country,” said Dhor. Already, over 25 youths in Mombasa have been financed and are operating tuk tuks across the town.