Is it a bird? Is it a plane? If you’re anywhere near the Appelgryn residence in Durban’s Seaview, the answer is it’s a tuk-tuk. 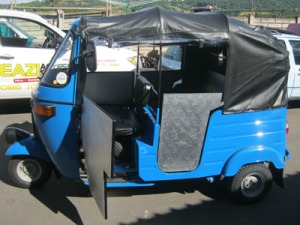 Despite getting strange looks from fellow road-users, Lynika Appelgryn says her mother’s having the last laugh considering the high petrol price; she’s driving a tuk-tuk.   It’s a motorised three-wheel rickshaw.

“Even the police, they will stop and ask us ‘where did you get this?'” she laughed. “You have to have a motorbike license. But it’s manual as well. My mom had to go for a manual bike licence, to drive the tuk-tuk.”

Appelgryn says the vehicle’s able to transport them wherever they want to go, albeit a little more slowly than a conventional vehicle.

“Every time we drive somewhere people stare at us, smile and the taxi’s don’t stop hooting!” she added.

One response to “Petrol hikes: tuk-tuk the answer? (Durban Seaview)”