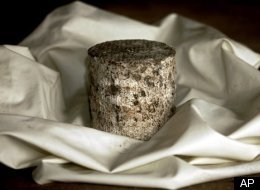 The milk that Paulette Marmottan uses in her cheese comes fresh from her cows and goats, so warm that on cold mornings, a cloud of steam goes up as she pours it into a cauldron.

It’s the first step in making persille de Tignes, which according to local lore, was a favorite of the mighty 9th century emperor Charlemagne.

But the Marmottans are the last family making it, and while most French people may be content with the mass-produced cheeses of their globalizing world, the disappearance of traditional varieties is seen by some as threatening the very essence of Frenchness.

The persille de Tignes is not alone on the list of endangered fromages. Dozens have been lost since World War II, and experts say another dozen or more are considered at risk of extinction. No one has a precise count of how many cheese types France produces, but the country has long prided itself on having a different one for every day of the year.

“The French have forgotten what real cheese is,” said Veronique Richez-Lerouge, who heads the Association Fromages de Terroirs, a group aimed at protecting France’s cheese culture. (3 Wheeled Cheese published an article and shared a youtube video about Veronique Richez-Lerouge Living Raw – the French Revolt Against Pasteurized Cheeses, have a look for better understanding of the topic)

Many blame the Americans, saying they habituated the French to pasteurization, to the detriment of raw-milk cheeses – an ironic claim, considering that the germ-killing process was invented by a French hero of science, Louis Pasteur.

Other big forces are also in play: the creeping homogenization of the global palate, food-safety regulations imposed by the European Union, and the increasing weight of the food industry, which churns out just a handful of blockbuster varieties.

Some small farms cannot cope with the new rules, and Big Food stands ready to buy them out.

“There are plenty of cheeses that only exist as names in old books,” said Stephane Blohorn, who owns Androuet, a famous 101-year-old chain of Paris cheese shops.

The French are still prodigious cheese consumers. They eat just under half a pound a week per person on average, according to the Eurostat statistics agency. That puts them just behind the 27-nation EU’s champion cheese-eaters, the Greeks.

What has changed is the kind of cheeses the French eat.

Raw-milk cheeses, which until World War II and the arrival of the U.S. military accounted for nearly all French production, now make up only 7 percent of annual consumption, according to the cheese-boosters’ group. Now most French people go for pasteurized, mass-produced, plastic-wrapped varieties like emmenthal, camembert and the orange-colored mimolette, and processed cheeses like the Laughing Cow brand.

“Buying cheese has become like buying a box of detergent,” said Richez-Lerouge, whose association publishes a calendar featuring bikini-clad pinups straddling hunks of Saint-Nectaire, Savarin and Rocamadour from family farms.

In La Savinaz, a village perched on a snow-covered peak in the eastern French Alps, Marmottan trudges downstairs to the stable – on the ground floor of her Swiss-style house – to milk her 30 cows and 80 goats.

In the outsized cauldron, she blends the milks and adds yoghurt to kick-start fermentation. Several days later, she mixes and salts the curd, packing it into tall cylindrical molds that leak out any remaining whey before being dispatched to the cellar to age for a few weeks.

Local histories tell of Charlemagne tasting persille de Tignes tasting it during a visit and ordering a selection of the best wheels shipped back to the royal court.

Within recent memory there were dozens of families making persille de Tignes in this region of Savoie. Now Marmottan, 52, her husband and older brother are the last ones, making some 33,000 pounds a year.

“Little by little, the others got old and retired or decided it wasn’t financially worth it to them,” Marmottan told The Associated Press. “A farm has to be viable financially and the product we make has to interest people or we can’t in good faith continue. It’s too hard a job.”

In the past two decades, the number of small family farms has plummeted, falling by 14 percent between 2000 and 2004 alone, to just over 100,000, according to an Agriculture Ministry study.

The shift away from raw milk cheeses began with the rise of pasteurization, which kills the occasionally deadly micro-organisms that can lurk in milk.

Then, in the 1960s and ’70s, supermarkets moved in and the one-product store felt the squeeze. In 1979, France had some 20,000 fromageries, according to the National Federation of Milk Product Retailers. Today, there are about 3,300.

“Supermarkets have effectively squeezed out the small retailers,” said Androuet’s Blohorn. “Those who survived are really offering a superior product aimed at very discriminating consumers.”

At Au Bon Fromage, a Paris store, persille de Tignes can retail for up to $16 a pound.

Marmottan follows a recipe passed down orally by her parents, who learned it from theirs. Marmottan taught it to her three children, but like many in the younger generation of the village and surrounding Alpine valleys, their interests appear to lie elsewhere.

The Marmottans’ eldest daughter is a lawyer, and the youngest is a member of France’s national ski team. Their son, 28-year-old Francis, is a ski instructor and maintains the farm’s equipment for half the year during the off-season.

So his mother has pinned her hopes on the next generation – Francis’ 2-year-old boy and 6-month-old girl.

“I say my prayers every day that they’ll turn into little cheesemakers,” said Marmottan, her face crinkling in a mirthful smile.