Sustainable Urban Transport in India: Role of the Auto-Rickshaw Sector

Across India, auto-rickshaws make more than 229 million passenger trips per day. That number is expected to 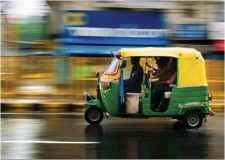 Now, the World Resources Institute and EMBARQ are releasing the most comprehensive report ever on auto-rickshaws, which are such an important part of urban transport in Indian cities.

The publication highlights the need for regulatory reforms to promote dispatch services and vehicle-related reforms to address emissions and road safety. Adopting these reforms is key to ensuring that auto-rickshaws contribute to a more efficient, clean and safe transport system.

“Given the current urban transport trends and challenges, such as rising emissions and road fatalities, there is a critical need to promote more sustainable transport options in India. Implementing the recommended reforms – such as the promotion of fleet-based dispatch services and vehicle improvements – will be key to ensure that auto-rickshaws can serve as an effective alternative to private motor vehicles. These reforms are essential to mitigate the environmental and road safety challenges that currently exist in this sector.”

The publication is available online at: http://www.embarq.org/en/sustainable-urban-transport-india-role-auto-rickshaw-sector

Watch and link to videos at: www.embarq.org/multimedia

The report will be launched Friday, February 10, at Rickshaw Rising – An Auto-rickshaw Entrepreneurship Summit, in Mumbai, India: http://www.embarq.org/en/events/12/02/rickshaw-rising