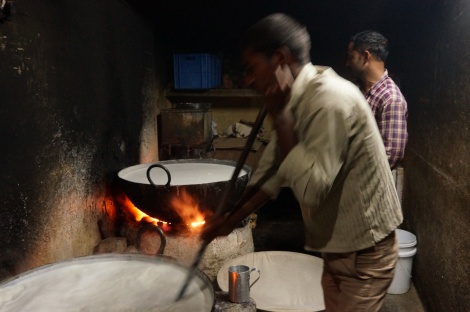 Paneer  is a fresh cottage cheese common in South Asian cuisine. It is of Indian origin. In eastern parts of India, it is generally called Chhena. It is an unaged, acid-set, non-melting farmer cheese or curd cheesemade by curdling heated milk with lemon juice, vinegar, or any other food acids.

Unlike most cheeses in the world, the making of paneer does not involve rennet as the coagulation agent thus making it completely lacto-vegetarian and providing one of the sources of protein for vegetarians in India. It is generally unsalted.

cooling the milk to 80 deg celsius.

Dating back to Ancient India, paneer remains the most common type of cheese used in traditional South Asian cuisines. The use of paneer is more common in Nepal, India, Pakistan, and Bangladesh due to the prominence of milk in their cuisine. It is very popular when wrapped in dough and deep-fried or served with either spinach (palak paneer) or peas (mattar paneer).

While cuisine in the northern states of India features paneer in spicy curry dishes, the use of sana/chhana/chhena in Oriya,Assamese, and Bengali cuisine is mostly restricted to sweets, for which these regions are renowned. The well-known rasgullafeatures plain chhana beaten by hand and shaped into balls which are soaked in syrup. The sana/chhana/chhena used in such cases is manufactured by a slightly different procedure from Mughlai paneer; it is drained but not pressed, so that some moisture is retained, which makes for a soft, malleable consistency. It may, however, be pressed slightly into small cubes and curried to form a dalna in Maithili,Oriya and Bengali cuisines.

the water left from the last cheese production is added to the milk, when the milk starts to curdle 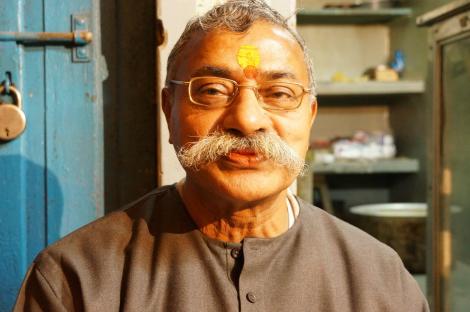 Pandit Ji in the picture above says his family has been running the cheese and sweets shop in the alley for about 200 years and his son is the 5th generation. He has seen a lot of changes since he had learnt the trade from his father. “The times have changed, in our times there weren’t any industries selling milk. Although in Varanasi, I find people are still drinking pure milk”, he answers when asked about the state of milk today.

Then, it is filtered. The cheese gets collected in the filter cloth. And the water is stored for the next cheese production cycle.

His son (in the picture above), however knew the right temp (heating unto 200deg cel then cooling it off to 80deg cel). They produce about 100 kgs of cottage cheese everyday and on the days of festivals, about 400 kgs. Shockingly, Varanasi celebrates 410 festivals in an year.

His son says cottage cheese isn’t the same if made with industrial milk, “it has to be raw milk from the dairy”. The texture of the cheese changes and becomes hard and rubbery.

After the cheese has been collected in the filter cloth, it is pressed with a special stone (which helps is drying the extra water and the shape of the cheese). 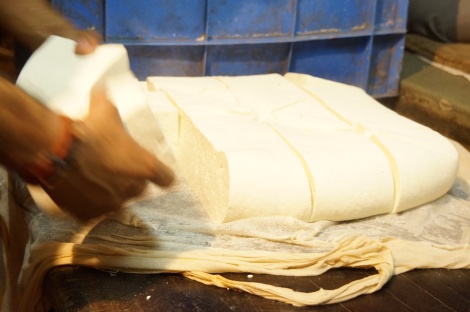 The filter cloth is opened up and the cheese is sliced into pieces.

Every month a doctor visits from the Health and Safety Department and inspects the processes and standards for hygiene and cleanliness. He checks for the level of urea in the foods and milk. Ramesh (Pandit Ji’s son) confirms “Their shop has never been sent a notice in all the years”. “These days controlling the level of Urea isn’t that easy because the cows are eating adulterated food, it’s in all our foods and it’s in us” Pandit Ji shouts it out. 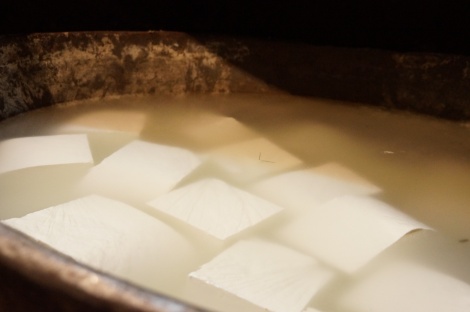 The cheese after being sliced, is put inside chilled water to cool off

The prices of the milk aren’t decided by the government. The government decides the prices of industrial milk probably, says a third man. Their family sets their own prices of cottage cheese, which might change everyday. It really depends on the price at which they buy raw milk from dairy. “If he changes prices, we change too”, says Ramesh. 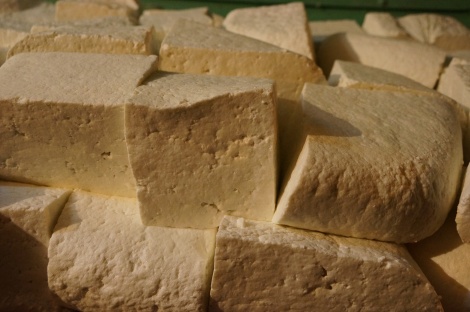 The cheese is now ready to be sold. It is mostly used in cooking curries and in spicy dishes.

This cottage cheese is largely used as a cooking agent in the kitchens of India. It is enjoyed as a delicacy for starters as well as in main course. Queso blanco or queso fresco are often recommended as substitutes in the Americas, as, unlike paneer, they are commercially available in many American markets. Both are generally salted, unlike paneer.

Farmer cheese and dry curd cottage cheese, are similar except that they are made from cultured milk and often salted.Anari is very similar in taste and texture to fresh Indian Paneer. Anari is a fresh mild whey cheese produced in Cyprus. Beyaz peynir is a similar Turkish cheese.

[UPDATE: Short film on this story and the manufacturing process of Paneer]