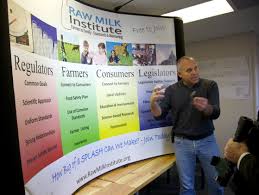 “The fledgling Raw Milk Institute is in trouble.

The grandiose plan for a national organization that will at once establish raw milk production standards, educate farmers on improving their safety protocols, lobby for raw milk legislative expansion, and back research into raw milk’s benefits finds itself hobbled by internal dissension out of the gate.

I don’t think it’s overly dramatic to question whether the group can survive what has turned out to be a huge test of its purpose and objectivity.

As evidence, beyond the debate on this blog, a group of a dozen activists today sent everyone associated with RAWMI a formal request for information on standards, membership requirements, and legislative plans and activities.

The request was prefaced by a statement from Liz Reitzig, co-founder of the Farm Food Freedom Coalition, who said she was “concerned that RAWMI is not as transparent as its website indicates.”

She also complained that “one RAWMI board member in particular has maligned other raw milk activists and slandered individuals in an unprofessional manner.  Whether or not RAWMI intends to or not, this behavior reflects unfavorably on the organization as a whole, discrediting the purported work of the organization.”

Within hours of receiving the request, Mark McAfee, the founder of RAWMI (and owner of Organic Pastures Dairy Co.), said common standards, protocols, and food safety plans “are officially under development and not completed.”…”

Read it all on The Complete Patient.