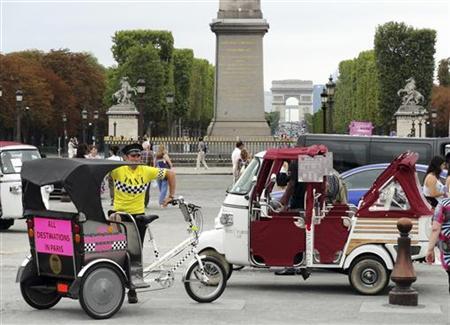 Parisians have a new, very affordable way of getting around the French capital as of this week – free “tuk-tuk” taxis.

Entrepreneur Kheir Mazri has launched a new service using 24 tuk-tuks, the motorbike-powered carriages common in much of Asia, that will do the rounds of the city seven days a week, with 150 stations on fixed routes where people can hop aboard.

“We started two days ago. People couldn’t believe their eyes at first,” Mazri said. “We’re testing it in Paris first and if it works we will expand nationally, and maybe internationally,” he told Reuters.

He makes money by selling advertising space on the sides of the electric tuk-tuks, imported from China.

Price is not the only sales pitch for what Mazri proudly describes as his “low-cost” enterprise.

Traditionally, taxi drivers discourage passengers from eating or drinking in the vehicle. But Mazri plans to sell tea, pastries and popcorn on his fleet, which follow  the routes taken by 14 Paris bus lines, at 50 euro cents a pop.

He has no plans to compete directly with conventional taxis by allowing passengers to request destinations.

One hiccup – rain – has led to a temporary suspension of the service until after the coming Christmas weekend, he said.

The tuk-tuks have been taken off the roads while roofing is added so that clients can enjoy the trip without getting soaked.

One response to “Free “tuk-tuk” taxis for Parisians”