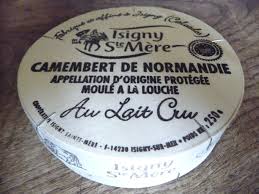 The debate over just whose soft, salty Camembert is the true Normandy cheese, may be headed for the courts.

Small producers from the northwestern French region say industrialists are capitalizing on the artisan makers’ prized “Camembert of Normandy” label by using the similar “Camembert made in Normandy” phrase to designate their version of the round cow’s milk cheese.

While any cheesemaker around the world can print the word “Camembert” on their label, the “Camembert of Normandy” term is a form of European certification, or appellation d’origine protégée (AOP), reserved since 1983 for the few who follow traditional methods.

Purists use raw milk from Normandy cows and hand-ladle the cheese into molds. Industrialists are more likely to pasteurize their milk – or heat it to kill bacteria and render the curd easier to process – and procure their milk from all over, allowing for a lower-priced product.

Worried that the difference between the two is being lost on consumers, the association of AOP Camembert makers plans to file a “usurpation of notoriety” claim by the end of the year to bar industrialists from using the similar phrase.

To be fair, the “Camembert made in Normandy” label is accurate, as these industrialists do make their pasteurized Camembert in the region.

But consumer experts say the nuance in wording compounds a situation in which shoppers are already swamped with information, have poor understanding of label meanings and are wired to disregard them anyway.

“People will pay more attention to colors on the box or its rustic aspect or the image of a cow under an apple tree,” said Charles Pernin, a food expert at the French consumer protection agency CLCV.

The AOP producers said they first tried to negotiate with the industrialists by requesting that they contribute financially to a publicity campaign and drop the “Made in Normandy” phrase, but the two sides were unable to reach an agreement.

“We’re not warriors,” said Patrick Mercier, president of the association of Normandy Camembert producers filing the complaint. “We tried to find a solution; now this is our last resort.”

The federation of industrial Camembert producers has not responded to requests for comment.

AOP Camembert represents only about five percent of the total French Camembert market share, a drop from several years ago, when a couple big AOP producers switched over to thermalized milk and renounced their AOP designation.

In 2010 AOP producers made 4,300 tons of Camembert, the equivalent of 17 million wheels of cheese, while the non-AOP industrialists made 80,000 tons, or 300 million wheels, according to Mercier.

With their percentage of the market share at an all-time low and the added confusion over labels, the AOP producers are concerned they will get stamped out of the market, and the tradition will be lost.

“Right now the numbers are catastrophic for AOP Camembert,” said Mercier, a Camembert milk producer himself. “So imagine if we were to disappear; a true image of Normandy would disappear along with us.”

The pungent, runny cheese with the earthy smell and fruity flavor dates back to at least the 18th century in the Camembert village of Normandy, a slice of countryside with streams and hills and apple trees.

Initially confined to Normandy, the cheese was brought to Paris in the 1850s via the newly built railway and gained national appeal in the 20th century.

“Thanks to World War One – if we can say that – soldiers from all over France encountered the Camembert, which was part of their rations,” said Pierre Boisard, author of “Camembert: A National Myth,” a history of the cheese and its national importance.

With the invention of the wooden box used to transport the cheese in 1890 and the advent of pasteurization in the 1950s, Camembert spread globally, leading to today’s divided market.

Compared to the pasteurized kind, raw-milk Camembert tends to be creamier with a sharper flavor and a brighter yellow on the inside. It also costs more.

At a Monoprix supermarket in Paris the five AOP Camembert varieties retail on average for 3.37 Euros each, with the gourmet store brand costing the least at 2.71, while the 10 non-AOP offerings average 2.54 Euros, with the regular store brand the cheapest at 1.35.

Whatever the difference in ingredients and price, the majority of the labels have some kind of rustic image, be it country landscapes or artisan workers or cows, in place to appeal to the consumer’s emotional side.

This labeling similarity threatens to obscure the lines between the varieties and blur them into uniformity.

“We talk a lot about biodiversity, but there’s also a cultural diversity, a gastronomic diversity that’s at stake, and that’s why these specific labels like the AOP were put into place,” said Pernin, the consumer expert.