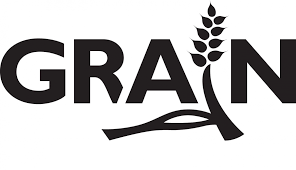 Milk is an essential source of health and income for the people. The popular, or people’s, milk chain, independent, counts on local vendors who collect the milk from the small producers, owners of a few milk cows. Such systems of “people’s milk” compete directly with the ambitions and attempts by the big dairy industries, such as Nestlé and others, that want to take over the entire milk chain- from stables to markets.

Very early in the morning, every day, before most people in Colombia, SA,  get out of bed, close to 50 thousand milk vendors are making their rounds in the streets of the cities across the country. These “jarreadores”, as the milkmen are called, ride their motorcycles with great cans of milk collected from various of the millions of rural places in Colombia.

They distribute daily 40 million liters of fresh milk at a price that close to 20 million Colombians can afford, and who boil it rapidly to guarantee its safety. Perhaps there is no source of nutrition and dignity as important in Colombia as what has come to be called “the popular or people’s milk chain”, or popular milk.

The jarreadores have protested, along with small farmers, small scale dairies and consumers against the repeated attempts by the Colombian government to destroy the people’s milk chain, or people’s milk.

In 2006 the government of President Uribe issued Decree 616 that prohibits the consumption, sales and transport of raw or non pasteurized milk, which would make the people’s milk illegal. The decree set off a wave of enormous protests throughout the country that forced the government to postpone adoption of the norm. The popular opposition did not wan and two or three years later more than 15 thousand people marched in Bogotá, the country’s capital. The government found itself forced to put aside the issue for another two years.

Decree 616 was not the only threat to popular milk. Even though Colombia is self sufficient in milk, free trade treaties, under negotiation with a few dairy exporting countries, could annul key protections for the sector, making it vulnerable to imports of cheap powdered milk—especially from the European Union, where milk production has strong subsidies. In the words of Aurelio Suárez, executive director of the National Association for Agricultural Protection, a free trade treaty with the EU would be a “true hetacombe” for Colombia’s milk sector.

In 2010, there was another attempt to impose regulations prohibiting popular milk, and opposition united against the proposed free commerce treaties. There were massive movements that left the government with no option other than to postpone regulations till March of 2011, when a new wave of manifestations arose and the government had nothing to do but recognize its defeat. In May of 2011, Decree 1880 was issued, which recognizes popular milk to be legal and essential.

This impressive series of victories by Colombia’s so called popular milk chain, is something to inspire many similar movements across the world in their fight for small scale production and sales of fresh milk and raw milk dairy products.

Supposedly, the battle has not ended. A free trade treaty with the US was approved and negotiations are underway with the EU. But the milk sector is now in the hearts of the people’s resistance against any such government policies, and happen what may, it is clear that people’s milk (or the popular milk chain) will be present in the Colombian people’s fights against government policies and for a new path of social transformation.

The battle is against a strong global tendency. Dairy products, like other foods and sectors of agriculture, have suffered in face of great consolidations in the past decades. Today, various multinationals, like Nestlé and Danone, sell their dairy products in all corners of the planet.  And consolidation happens also on the farming level, with larger dairy herds, more confinement and higher milk production. Besides this, the financial sector injects new money into the dairy business, searching its own part of the greedy takes.

But throughout most of the world, milk and dairy products continue largely in the hands of what the government and industry call “the informal sector”—small farmers who sell their milk directly, or by means of local vendors who go to the remotest places to buy the milk from  small producers and take it directly to consumers. Available data indicates that the people’s milk chain contributes to more than 80% of milk commercialized in developing countries, and 47% globally.

In India, largest milk producer in the world, popular or people’s milk answers for 85% of the total national milk market. The “white revolution,” which saw a tripling in milk production between 1980 and 2006, was fruit of this popular sector. It was the small agriculturalists of India, and the local markets, that headed the enormous expansion of milk production in the country during these years. Today 70 million small farms in India have dairy cattle, and more than half of the total of rural families in the country and more than half of the milk they produce (largely buffalo milk) goes to feeding people in their own communities, while ¼ is processed as cheese, yogurt and other dairy products, produced by this “ non organized local sector”.

Many are the contributions of popular milk to the lives of people throughout the world. It is a key font of nutrition—it is a subsistence food for those who have animals, and affordable food for those who don’t have them. Fresh popular milk tends to be a lot cheaper than processed and packaged milk sold by industries. In Colombia the price of popular milk is less than half the price of pasteurized, packaged milk sold in the supermarkets. The same in Pakistan, where the gawalas (traveling vendors) sell fresh milk they pick up on rural properties for the consuming population, at half the price of packaged or industrial milk.

For the small farmers, popular milk offers one of the only consistent and regular sources of income. As milk is perishable, it is also an important source of income for the small vendors who collect it daily from small producers to take to consumers who daily buy milk, cheese, yogurt and other fresh dairy products. The cultural custom of heating or fermenting milk guarantees safe consumption.

The elite looks down on the “informal sector”, considering their products unhygienic and of low quality, and the system as inefficient. Some even complain that they don’t pay taxes.

The truth is the small farmers, pastors, rural workers without land, show us they produce enough milk to meet the needs of the people, and the small scale vendors and milk factories know very well how to guarantee that milk and its products reach their markets in good state.

“The non organized sector” can do things very well without the big industries, when these don’t set them back or put an end to them with disloyal practices that lower prices in face of milk surpluses or with unjust regulations.

In markets that for long have sold industrialized dairy products, the people’s milk is returning. From the United States to New Zealand markets for direct purchase from producers, either of organic or raw milk, are growing as people search for better quality food outside the industrial system. The small producers are also fed up with the dominating model. The turn to intensive production has bound them in face of high costs and debts: the price of milk rarely covers the costs of production. Rural communities where these producers live are fed up with the pollution generated by the growing presence of mega dairy industries. There is a movement towards new models of production and distribution that protect the ways of life of the local farmers and provide consumers with quality food.

Without doubt, the movement for popular or people’s milk is faced with the grand ambitions that control the global dairy industry, which together could be called “ The Big Dairies”. At a time when the milk markets of the North are already saturated, The Big Dairies direct their batteries to markets supplied by popular milk. These milk corporations and a few affluent elites intend, together, to reorganize the entire supply chain from the small milk producer to the markets.

Translated from spanish by Robin Geld.