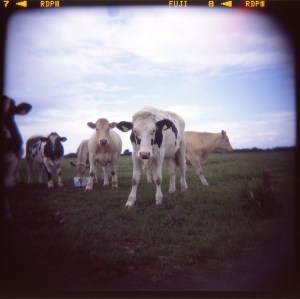 What’s nutritious, possibly dangerous, and illegal in all but 25 states? The answer is raw milk, and it’s at the heart of the grassroots food movement and a regulatory controversy.

In technical terms, “raw” milk is unpasteurized–it hasn’t been heated to kill pathogens. That might sound crazy (and maybe it is), but the issue has two sides. Yes, pasteurization kills bacteria that can cause tuberculosis, salmonella, and other nasty diseases. However, fans of raw milk claim that the heating process also wipes out beneficial proteins and enzymes that promote digestive health and strengthen the immune system.

Where does this fit into green culture? First, raw milk is inherently local because it simply isn’t meant for cross-country shipping. Also, dairy farms that produce raw milk tend to use a more sustainable system. As Danielle Tsi wrote on the Etsy blog,

Because raw milk farmers don’t rely on pasteurization to prepare the product for market, all the work goes into tending the land to create the perfect ecosystem for the production of quality milk. The end result is healthy pastures (as a source of nourishment) and sustainable herd sizes — as many cows as the land can take.

Right now, raw milk is hardly a popular product. Even in California, only three percent of the population consumes it. And the few raw milk farms that do operate fight a constant battle with regulators. For example, Organic Pastures Dairy Co., California’s largest raw milk producer, found its products recalled and its business shut down after suspicions of E. Coli contamination arose. Food safety inspectors descended on the farm, running test after test, but Organic Pastures came out clean. This begs the question: Are regulators acting irrationally?

Usually, greens and progressives campaign for tighter regulations, but this time the issue isn’t clear-cut. We can’t fault food safety regulators for worrying about food safety. That’s their job. Still, it is unfair to target a fringe product like raw milk when mainstream industrial farms have plenty of problems. After all, contamination in big ag is far from unheard-of.

In both the dairy and meat industries, factory farms keep thousands of animals in small spaces with astonishingly filthy conditions and feed them an unhealthy diet. Then they give the cows, pigs, and chickens heavy doses of antibiotics because, for some reason, the livestock keep getting sick. Why do these factory farms get a free pass when a dairy with a few hundred cows living in a natural way is a health threat because its milk is “raw?”

The answer, of course, is political influence. Big ag has the same advantage over small, sustainable farms as big oil and coal have over renewables startups.

The raw dairy debate also takes a libertarian bent. If consumers think the health trade-offs are worth the risks, should they have the right to buy raw milk? Or is it the government’s responsibility to keep potentially dangerous products off the shelves?

This is a serious question, and it’s one we must consider, since it reaches across the political spectrum, to the core of our values.

What do you think? Would you (or do you) drink raw milk? Should dairies be allowed to produce and sell it, if consumers are willing to buy it?

This post was written for Blog Action Day 2011, part of an annual event that unites the world’s bloggers in posting about the same issue on the same day. For more info visit http://www.BlogActionDay.org and follow #BAD11 on Twitter.