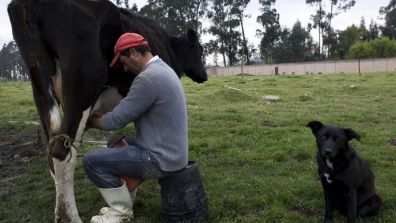 Oct. 13: Reinaldo Cardona, 42, milks a cow on a a dairy farm in Cajica, Colombia. Many of the country's small farmers fear for their livelihoods because of the free trade pact approved by the US Congress.

Colombian farmers fear a free trade deal approved by Congress last week will bankrupt them – even as the president has trumpeted the pact as a commercial milestone that will strengthen export muscle.

Some farmers worry that imports of less expensive, subsidized U.S. goods could drive them out of business. Small farmers help make Colombia self-sufficient in food production but tend to earn very little.

“What you hear is that the price will go through the floor,” dairy farmer Margarita Maria Jaramillo said as she and her husband milked their 12 cows recently in a dew-laden pasture in this dairy town just north of Bogota.

If the prices drop, “we’ll have to sell the cows,” she said. “What else can you do?”

It’s too early to say whether that’s a real danger.

But trade pacts always produce winners and losers, and those most at risk are subsistence farmers who, like Jaramillo, live humbly and lack access to capital.

The Colombia pact, signed in November 2006, had been held up for so long because Democrats in the U.S. Congress said Colombia had not done enough to halt killings of trade union activists.

Indeed, most Democratic congressmen voted against the pact in defiance of the White House, which had argued that Colombia deserved it for being such a loyal ally.

Santos called the treaty “the most important in commercial terms we’ve signed in our history.” He says it will create a quarter of a million Colombian jobs and boost exports by $17 billion a year.

Yet even Santos’ own agriculture minister has warned of the risks to small farmers if they aren’t adequately protected by the government. Will they be able to adapt as tariffs on imports from the U.S. are gradually reduced to zero? In the case of milk, that will happen in 15 years.

A 2009 study by three Colombian economists, partially funded by Oxfam International, forecast that the country’s 1.4 million small farm households will see their income drop by 10.5 percent under the trade agreement. It predicts producers of chicken, pork, wheat, beans and sorghum will be especially hard hit by U.S. government-subsidized imports.

The authors suggest some small farmers could turn to growing coca, the basis of cocaine. Colombia is the world’s No. 1 cocaine-producing nation.

The average monthly income for Colombia’s small farm households was about $200 in 2005, when small farmers worked 51 percent of land under cultivation, the study found.

Bilateral trade pacts became increasingly popular over the past decade as global trade talks stalled and hopes for a Western Hemisphere-wide treaty evaporated. But they tend to create imbalances, favoring some industries over others.

Economists continue to debate whether Mexico, on balance, was a net beneficiary of the 1994 North American Free Trade Agreement it forged with the United States and Canada.

Mexico gained in technology transfer and investment from NAFTA, and consumer prices dropped dramatically in Mexico, but there’s disagreement on whether farming benefited.

U.S. agriculture was an unquestionable winner, with many small Mexican farmers unable to compete with the flood of U.S government-subsidized corn and other crops.

“You had a lot of U.S. (agriculture) exports in key areas where Mexico had been self-sufficient,” said Harley Shaiken, a University of California-Berkeley professor. Many subsistence farmers gave up long before the last import tariffs were phased out in 2008.

Fears of similarly going out of business and being forced off the land haunt Colombians including Jaramillo and her husband, who get about $1.60 a gallon for their milk and only yield about 12 gallons (45 liters) a day.

Colombia produces 4.5 billion gallons (17 billion liters) of milk a day and only exports about 2.5 percent of that. Its 400,000 dairy farmers fear milk byproducts such as whey will enter the country with zero tariff protection and end up driving down prices, said Jorge Uribe, president of the National Association of Milk Producers, or ANALAC.

Jaramillo and her husband say they couldn’t survive if milk were to drop below about 85 cents per gallon.

Also worried are Colombia’s 4,000 cotton growers, who were nearly crippled in the 1990s when then-President Cesar Gaviria sharply reduced tariffs. Santos was finance minister at the time.

“We never recovered,” said Luz Amparo Fonseca, president of Colombia’s cotton growers association. The tariff for cotton dropped from about 90 percent to 10 percent.

Many trying to assess the effect the free trade deal will have in Colombia are looking to the experience of Peru, where a similar pact with Washington took effect in 2009.

Peru’s government had promised to create a support fund for farmers to offset the feared impact of imported subsidized U.S. agricultural products. But the fund turned out not to be needed.

The financial crisis in the United States staved off the feared flood of U.S. products, in part because so much U.S. corn and soy was diverted to produce biofuel, said Fernando Eguren, president of the Peruvian CEPES think tank.

One sector that did suffer was cotton.

“Cotton subsidized by the United States entered Peru at about half the (local) price,” said Reynaldo Trinidad, editor of the Peruvian trade journal Agronoticias.

“We’ve lost over 50 percent of the corn market,” he said. “This should give us the opportunity to get us to where we were.”

Colombia is already a net importer of wheat, corn and barley, Kidd said.

Likewise, Eguren says, Peru has been a net importer of wheat since the 1940s, so domestic farmers weren’t hit hard by the fact that U.S. wheat imports have grown eightfold since 2007.

Peru’s overall trade balance with the United States has suffered, however.

Analysts attribute that to the boom in commodities prices that raised the value of Peru’s chief exports, metals and minerals.

With more money in their pockets, Peruvians have sharply increased purchases of U.S. goods, buying everything from automobiles and heavy machinery to electric stoves.

Based on reporting by The Associated Press.
Read more: http://latino.foxnews.com/latino/lifestyle/2011/10/17/colombia-trumpets-free-trade-deal-but-farmers-on-edge/#ixzz1b6RQdyd7