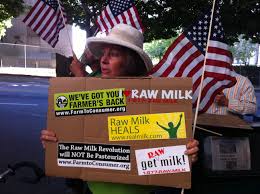 “Raw milk” is a phrase where neutrality is as small as Vatican City or San Marino. Either you are intrigued by the value of what it can bring into your life, or you are so horrified at the prospect that you wonder why we are even having a conversation.

Raw milk should really be called “unpasteurized milk.” You can make cheese, butter, yogurt, and other milk products from raw milk, but those who consume raw milk usually do so as a glass of milk.

Countless anecdotes speak to raw milk being a godsend to their lives or their loved ones, helping with allergies, illnesses, and overall health. And while anecdotes aren’t hard evidence, their stories are rather compelling.

If anecdotes exist on the other side of the debate, we aren’t hearing about them. We hear when e.coli taints a hamburger or spinach, but not raw milk.

We have gone on and on about a lack of food safety, particularly when it comes to factory farms. And in an era where the sparseness of food inspections would make Upton Sinclair furious, raw milk has been attacked by government officials on countless levels.

Even if you don’t believe 90% of what is in movies such as “Farmageddon,” the remaining 10% is enough to make you go “why all the fuss?”

The stories from the raw milk advocates paint a picture of law officials going after those farmers that are following the rules, and for those who don’t get a license, reacting in an overblown fashion given the lack of severity of the charges.

If raw milk and its by-products were so bad for us, you would think that all 50 states would ban raw milk, even for the farmer. But they don’t.

Given the few people who drink it, law enforcement spends a boatload of money per incident going after farmers over raw milk. Buying raw milk isn’t the problem, as these stories never seem to involve the consumers, only the farmers.

On many levels, we are told to trust factory farms and GMOs, but we can’t trust local farmers. Think of how many farmers follow organic practices, but can’t declare “organic” because the paperwork costs are too high. Informed consumers are finding it easier to trust local farmers rather than factory farms and GMOs. And raw milk is part of that battle.

When the late David Shaw was writing about a rare burger for the Los Angeles Times, he suggested a solution to satisfy all comers.

I think every place that serves hamburgers (or any other food) should closely monitor the quality and care of its meat (and everything else it serves). Maybe every place that serves hamburgers should also have a legal waiver available to customers. You want a rare burger, you get a rare burger. But first you have to sign a form acknowledging that you recognize the potential danger from E. coli and indemnifying the restaurant against any damages should you get sick.

Kids can’t sign legally binding waivers, of course, but I’m not a kid. I’m an adult and I want to be treated as an adult, someone capable of evaluating potential risks and making decisions accordingly.

I want to try raw milk, and maybe even some yogurt made from raw milk. I am an adult. I am responsible. And though getting raw milk will be difficult, I want to try it for myself. I will keep you informed as to how that goes.

Raw milk advocates want to be treated as adults, and they want to have that freedom. If you are going to take that freedom away, then you better have a good reason. We’re waiting.