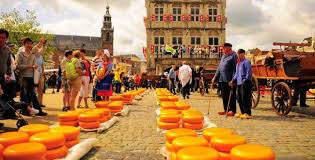 The EU cheese market is changing from a “comfortable place” where most producers are assured of growth to a cut-throat environment where rising raw milk prices are threatening margins.

That’s according to a new report from financial services provider Rabobank, entitled The European Cheese Market.

While cheese has traditionally been the preferred outlet for milk from the EU after fresh milk needs are satisfied, the report authors insist that times are changing.

They explain that a mature EU cheese market is experiencing falling growth and margin pressure, due to higher revenues for milk powder and butter products that are pushing up raw milk prices for cheese producers.

With EU milk quotas set to end in 2015, milk suppliers will need to find new ways to deal with the excess milk produced therafter, according to Rabobank.

Cheese has traditionally provided better export opportunities than any other dairy product, since consumer willingness to pay for quality European cheese has always been high despite relatively high prices.

And 2%+ growth rates in Ireland, Poland and Hungary, and 1-2% in Sweden, Spain, Greece are offset by almost static growth predictions for Germany and France.

Returns for even popular EU commodity cheeses such as Cheddar, Gouda and Emmental used to be higher than for skimmed milk powder (SMP) and butter.

But in 2007 the traditional EU cheese maker premium disappeared, Rabobank said, as demand for milk powders grew faster than for cheese, with expanding markets such as China and Vietnam supplementing their supplies of the former and milk prices fluctating wildly.

In hard and semi-hard cheeses, maturation processes that can last over a year further complicate things for producers, creating a “time lag that makes a market-driven approach very difficult in these cheese types,” the report authors said.

“When the cheese has been produced in times of high raw material prices, but is not sold until a period in which the entire dairy market has turned around and wholesale price are low, margins can even become negative.”

But growing demand for SMP and butter does not mean that EU dairy producers should forget cheese entirely, given that EU milk still cannot compete in the world commodity arena, said Rabobank.

Rabobank suggested strategies for EU cheese firms that include consolidation and brand-building, and offering added-value retail solutions via dedicated marketing.

Greater flexibility in product portfolios would also avoid the need to ride the “highs and lows” of the global market, as would targeting exports outside the EU where developing market demand for fresh milk leaves little room for cheese production.