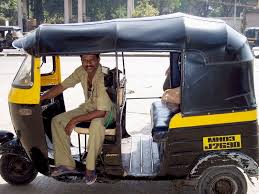 The Indian government has ordered all auto rickshaw owners to install GPS in their vehicles to ensure that they run on meters, in an effort to rein in overcharging tuk tuk drivers.

But owners of the city’s distinctive green and yellow tuk-tuks have resisted the government’s move, arguing it will cost more than two month’s pay.

KRISHNAN: For over 5 years, 37-year-old Rajesh Arora, has been plying an auto. It was financed from a loan he took from a private financier where he had to pay three times the amount.

He has just paid off his loan and from his current earnings that is about 5,000 rupees or $US 90 – it is just enough to keep the home fires burning.

But now he is an agitated person since the city’s transport department recently asked all auto owners to install GPS systems as soon as possible.

Unlike Mr. Arora, they are many still struggling under huge financial pressure.

Of the 55, 000 autos that move around Delhi, many pay half their daily wage as rent or hand over monies to financiers for their outrageously priced vehicles.

ARORA:(IN HINDI) Installing a GPS system is stupid; this is another form of corruption. Auto drivers are poor, we earn about Rs 200 daily and this is just about enough to feed our families. And to install a GPS system now will be a big blow� It is twice what we earn..

KRISHNAN: But the government wants the capital’s auto-rickshaws to fit the GPS, as it will enable a two-way communication system that will also help check speeding, route deviations and more importantly ensure safety of commuters.

Moreover, the devices will also be fitted with a panic button to allow women to raise the alarm and call the police if they are attacked.

Satyendra Garg, the city’s joint commissioner of police in charge of traffic explains why the systems are necessary.

GARG: Any public transport system that includes auto rickshaws also must have a GPS device for safety reasons. The reason is very simple. You can track them and in a case of mishap or in the case of complaint you can see their movements. Having a GPS is an absolute must from our point of view.

KRISHNAN: But there are others who argue that GPS devices are not workable as systems were not in place.

Rakesh Aggarwal, the Secretary of Nyaya Bhoomi an organisation spearheading the interests of the auto drivers says the measure does not address the causes of conflict between drivers and passengers: low fares which denied drivers a living wage and the influence of the ‘rickshaw mafia’ which controls the industry.

AGGARWAL: The government has not come out details on how it plans to implement the scheme and what benefits will be available for auto rickshaw drivers. When we sought information under the Right to Information Act, they told us they are yet to decide on the benefits that will be available to the drivers or the passengers. They don’t know how the errant drivers will be caught, punished and penalised. So basically they don’t have an implementation plan.

KRISHNAN: The proposed measures have not gone down well with the city’s auto drivers – more than half went on a day’s strike a few months back

Naushad Ansari is an auto driver for over a decade.

ANSARI: (IN HINDI)This is wrong. If the government wants to do it for safeguarding passenger security then it should invest for the GPS systems. How else can we live?

KRISHNAN: The police has made the installation of GPS mandatory in all taxis ferrying women employees of BPOs, media firms and corporate houses earlier this month. Violation could attract fines and prison terms for both the employer and the transporters.

Mr Garg wants the same to be installed autos

GARG: See, as far as we are concerned we want it at the earliest. Now the infrastructure or the process has to be gone through, I am sure this will depend on the government and the auto associations. But the sooner it is done, it is better for the city.

KRISHNAN: For now the auto rickshaw drivers have moved to a court that will listen to their grievances. The big question is who will blink first?