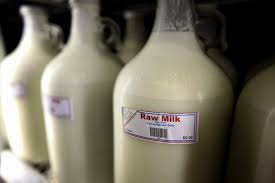 We in Sheridans believe that everyone has a right to drink one of Irelands best products; milk in its pure
unadulterated creamy and delicious form – raw milk.

We have been selling raw milk from David Tiernans farm in Dunleer, Co. Louth in our shops since November 2010 and have had a fantastic response from customers. We are also aware of two other producers in Ireland selling raw milk. Darina Allen; at her Ballymaloe farm shop in Cork and Aidan Harney from his farm in Ballymore Eustace, Co. Kildare.

Exercise your right to choose and try it while you still can.

The choice is the key point here…

We want to ensure that we have an open and public debate about the issue and that the government conducts themselves in a transparent manner. It should be noted that request made under the freedom of information act in relation to the drafting of legislation to Ban Raw Milk have been recently denied. By banning raw milk we are sending the message to the world that we dont trust our regulators, we dont
trust our farmers and we dont trust our milk.

We would welcome and encourage regulations on the sale of raw milk… As with any other food proper
regulation is necessary and correct.

At present the sale of raw milk is legal because of a 2007 EU directiveii. Four years later the FSAI have not introduced guidelines or imposed regulations on the sale of raw milk. Yet it is by no means desirable that every dairy farm in Ireland be permitted to sell raw milk. The solution that the FSAI have come up with is an outright ban, whereas for other foods produced, where there is a potential risk to public health; regulations, rather than bans have been imposed. Examples are Shellfish, Raw milk cheese, Beef, Chicken, Eggs

PUBLIC CONSULTATION
In 2008 a public consultation was undertaken regarding the sale of raw goats and sheeps milk. 17
submissions were received. Requests made under the freedom of information act in relation to these
submissions in relation to the drafting of legislation to Ban Raw Milk have been recently denied.iii
The odd and confusing contradictions about the ban: From a scientific stand point risk analysis is a key
term there does not appear to us to be a difference in the results of risk analysis performed for soft raw
milk cheese which is sold young and for liquid milk, yet the government (thankfully) does not propose a
ban on raw milk cheese – instead producers are heavily regulated.

The government is not proposing a ban on raw milk butter, citing as their reason, the addition of saltiv, yet
there is also no legislation being drafted to cover unsalted butter and – in any event, addition of salt is not a substitution for destroying pathogens as happens with Pasteurisation (heat treatment to 72C for 15-20
seconds) A Missed Small Business opportunity?

Raw milk production is a very real and viable business model for small farmers, servicing their local
communities who could modify existing facilities and put a single refrigerated delivery vehicle on the road with only a relatively modest investment and would be more than happy to operate under fair regulations.

Currently farmers selling milk to Co-ops get .33c-.35c per litrev. Raw milk is being sold direct from the
farmer at a retail price of approximately 1.50 – 2.00 per litre. The average price of a litre of pasteurised
homogenised commercially processed milk in supermarkets is from about 1.20 – 1.60vi.

It is not simply about cutting out the middlemen, consumers recognise economies of scale for these small
farmers and as such are prepared to pay a premium probably even well above current raw milk prices.

In Short…Our desired outcome is that regulations on the sale of raw liquid milk in Ireland are imposed. The aim of this is to allow consumers the freedom to make an informed choice whilst also minimising and managing potential risks.

WHAT YOU CAN DO

Contact the following, preferably by email and by post:
Your local Politicians (click the below link to find contact details for TDs in your area)
http://www.oireachtas.ie/members-hist/default.asp?housetype=0&HouseNum=31&disp=mem#tabs-3
The Minister for Agriculture Fisheries & Food Simon Coveney
Minister Simon Coveney
Dail Eireann,
Leinster House,
Dublin 2
01 6183753
simon.coveney@oir.ie

Other Organisations:
If you are a member of a farming or agriculture organisation such as Macra Na Feirme, IFA or ICSA or
indeed any other relevant organisation, ask them to lobby on your behalf.

Letters and emails should include:
Your full name and address and contact details
Sample Text as Follows:
I am very concerned to hear that legislation has been drafted to ban the sale of raw milk in Ireland. I also strongly object to the fact that there has been no public consultation process. I want to continue to have the choice to drink raw milk I am asking that you take a balanced approach and impose regulations on the industry and not an outright ban of the sale of raw milk.