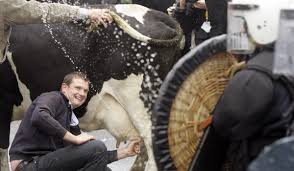 Raw milk supporters say they plan to milk a cow on Capitol Hill to protest federal action against a Pennsylvania farmer.

Members of the Grassfed on the Hill group plan to rally next Monday morning near the Russell Senate Office Building.

The Justice Department announced earlier this month that it was seeking a court order against Daniel L. Allgyer, owner of the Rainbow Acres Farm in Kinzers, Pa. The government claims his farm distributed unpasteurized milk across state lines for human consumption.

Protest organizer Liz Reitzig says the group contracts privately and the FDA does not have jurisdiction.